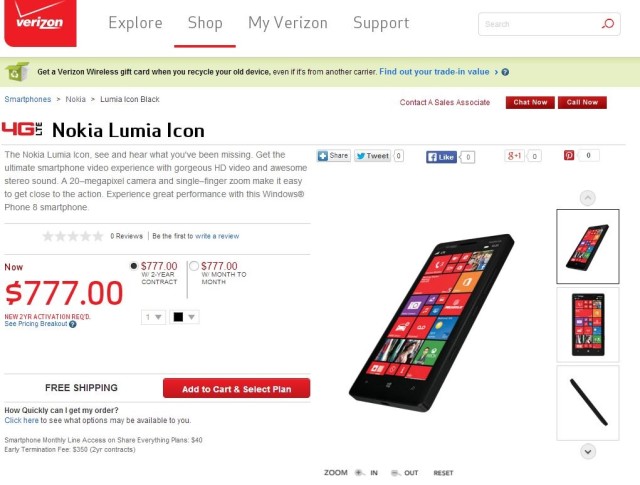 We have been waiting a while for the official launch of Verizon Wireless' next exclusive Nokia Lumia smartphone. Today, a few weeks after online rumors claimed the phone would be called the Nokia Lumia Icon, a page on Verizon's website went live briefly that seems to confirm those reports.

The page itself was spotted by a member of The Verge's forums and while the URL still exists, its content has since been taken down. Before it was removed, the page seemed to also confirm some of the rumored hardware specs for the Lumia Icon, including its 5-inch display, a 2.2GHz quad-core processor, and a 20 megapixel camera. The page also showed a price of $777.00 which is likely just a placeholder and not the real cost of the phone.

This would be the first smartphone in Nokia's Lumia lineup that would ditch the numbered branding in favor of a real name; previous rumors about the Windows Phone 8 smartphone called it the Lumia 929. Neither Nokia nor Verizon have officially announced the phone but it is expected to launch sometime in mid-January.

This may be one of the last smartphones made by Nokia before its Devices and Services division is officially sold to Microsoft, which is expected to happen before the first quarter of 2014.