LG advertising material for their new upcoming flagship, the G3, has appeared online. Although no previously unknown features have been revealed, the slightly grainy shots show large images that confirm the rumors we have been hearing recently. They include the expected 3GB of RAM and Snapdragon 801 processor but also clarify that the device will have a large 3,000mAh battery and Bluetooth 4.0 with NFC topped off with Android KitKat 4.4. LG has obviously elected not to wait for the upcoming Android 4.4.3 launch before pushing out their new device. 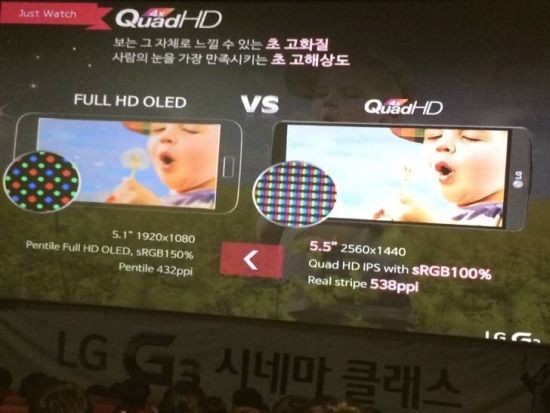 The adverts, published by G For Games, place more emphasis on the handset's display, however. This is confirmed to be the 5.5", 2560x1440 IPS unit previously rumored and also state that it will have an exceptional pixel density of 536ppi. One of the advertisements shows a direct comparison between the G3's QuadHD unit and the full HD display of the Samsung Galaxy S5. The G3's increased size, resolution and pixel density are all highlighted and a dotted graphic is used to illustrate clearly how the LG's display will appear more detailed than Samsung's.

Now that LG has inadvertently confirmed many of the G3 rumors floating around, there isn't much left to know about the company's new flagship device. Although G For Games does not say where they found the images, they have obviously been shot in Korea and in any case, clearly show the device we have been expecting. Seeing that LG recently released a teaser video for the handset before sending out press invitations to an event on the 27th of May, with strong hints that the G3 will be unveiled there, we don't have long left to wait before all of the secrets of this handset will be known.