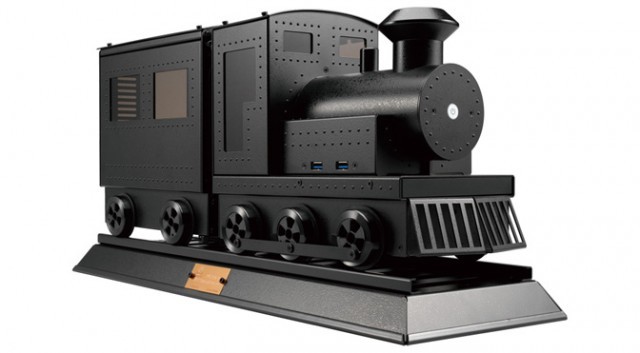 Taiwanese manufacturer of computer cases Lian Li has officially launched an aluminium PC case in the form of a train. The PC-CK101 comes in two flavours: a stationary version priced at $229 and one that actually moves for $379 with six pieces of track and an electric motor included. And if that's not crazy enough, the moving version even has a smoking chimney.

With its 18.5 cm width, 25.8 cm height and 51.5 cm depth, the case is quite small and only supports mini-ITX motherboards. However there's still room for three 2.5 inch hard drives or one 3.5 inch drive plus one slimline optical drive. Both versions come with a 300 Watt 80-PLUS SFX power supply and two USB 3.0 ports. The case is cooled with a 120mm fan at the rear and weighs 4.1 kilograms.

You'll have to wait till the end of September if you want to get your hands on one of both models when it's released in the United States and Canada. If you're not sure whether you want the PC case to move or not, you can watch the video below and decide for yourself.