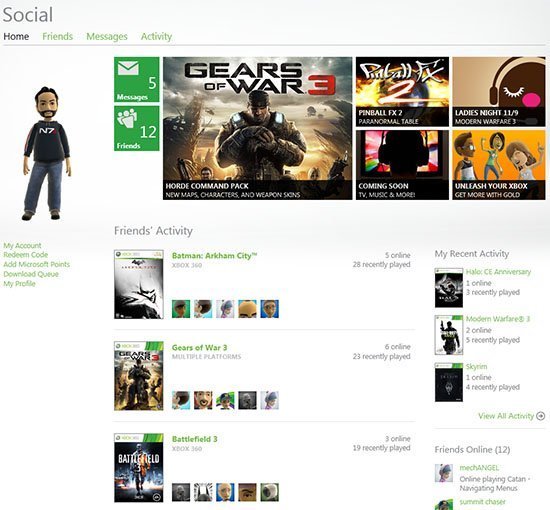 As promised earlier this week, Microsoft has officially launched a new design for its Xbox.com website. The new user interface closely resembles what the new Xbox 360 Dashboard design looks like, which as we reported today, was made available to download for a select number of Xbox 360 owners a few hours ago.

The Xbox.com web site provides a little bit of a preview of what awaits the rest of the Xbox 360 owners when they get access to the Dashboard update (reportedly sometime in mid-November). It includes a new Social section where Microsoft has introduced the idea of Beacons. This feature allows Xbox.com users to mark specific Xbox 360 games with specific days and times when they will be played. The player's friends can then know when to join in for online matches; a feature that is also part of the Xbox 360 Dashboard update.

There's another feature, as discovered on the Joystiq.com web site, that might please Xbox Live users. You can now change your Xbox Live auto-renewal terms right on Xbox.com rather than having to call Microsoft directly. This will be a big time saver for people who might want to cancel their Xbox Live subscription for a little while but then renew it later.

All in all the Xbox.com re-design looks good and the new Beacon and social networking features are well overdue. We would still prefer that the PC Games section have its own web site devoted to it but you can't have everything. If you haven't seen the new changes we suggest you head over there now.