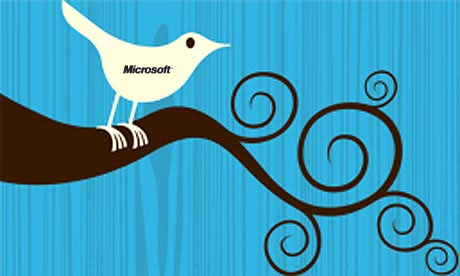 According to a report out of Forbes, Microsoft CEO Steve Ballmer had a breakfast meeting with Twitter CEO Dick Costolo earlier this week in San Francisco. The topic of discussion for this meeting is not known, but it was reportedly more of a business exchange than a social affair. As expected, both Microsoft and Twitter declined to comment on this meeting.

Though Twitter and Microsoft are two very different companies, a partnership or even an acquisition would be beneficial for both businesses. Microsoft has struggled to develop an online presence. It has a wide variety of online services, but its Live services are not as popular as its competitors, especially those of Google. On the other hand, Twitter has captured the hearts and minds of millions of people, but has struggled to formulate a business plan that would monetize its service. A merger or partnership would give Microsoft some tech cred in the world of web communication, while Twitter might finally get some assistance with its long-term revenue goals.

This acquisition rumor, though, may not pan out as Twitter CEO Costolo told AllThingsD that he was not interested in selling the company when he accepted the position of CEO in July 2010, replacing founder Ev Williams. A more likely outcome is a partnership that gives Microsoft access to Twitter's data stream and another outlet for its growing advertising business. Twitter will get a steady infusion of cash and an end to those nagging questions about its revenue plans.

Interestingly enough, this news comes hot on the heels of the revelation that Microsoft tried unsuccessfully to buy Facebook in 2007. The Redmond company reportedly offered Mark Zuckerberg $15 billion dollars and was promptly rejected by the Facebook CEO. Microsoft settled for a $240 million equity stake in Facebook and extended its advertising deals with the social network until 2011.