A 2012 U.S. patent filing by Microsoft made public Thursday shows the company's idea for augmented reality glasses designed for multiplayer gaming, possibly confirming a leaked roadmap that revealed a pair of Kinect glasses.

According to a filing with the U.S. Patent & Trademark Office, Microsoft is requesting a patent for "the system and related methods for inviting a potential player to participate in a multiplayer game via a user head-mounted display device." The glasses would make use of visual and voice data and are capable of facial recognition, eye tracking and providing a heads-up display. 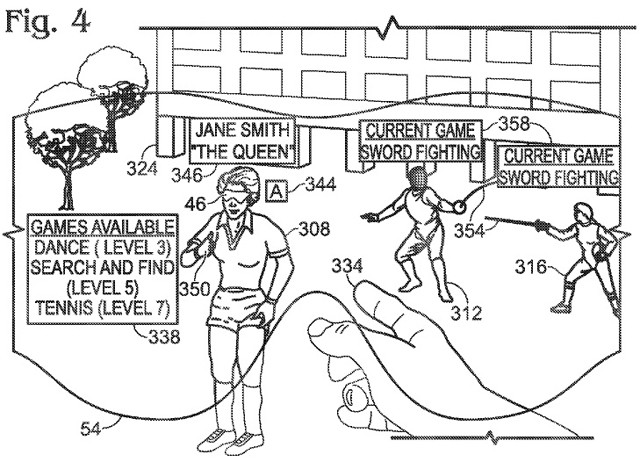 Microsoft says a person wearing the the glasses would be capable of inviting other users to play games through voice commands, and an accepted request would be confirmed by recognizing the other user's voice. The patent application states Microsoft believes a menu system to invite other users to gaming sessions is too time-consuming, whereas voice and facial recognition limit the amount of required interactions with the device.

The patent description sounds similar to the "Fortaleza" glasses mentioned in a leaked roadmap last year. That roadmap indicated the glasses would be released with WiFi support in late 2014, followed by a cellular version sometime in 2015. Microsoft said the glasses would provide a "breakthrough heads-up and hands-free" gaming experience that offers a "seamless integration of the digital world within the physical world."

Many of the rumored projects in the roadmap, which was two years old at the time of its leak, have now been revealed by Microsoft. Other products and services mentioned in the roadmap and since revealed include the next-generation Kinect, Xbox One and the entertainment services offered by the upcoming console.