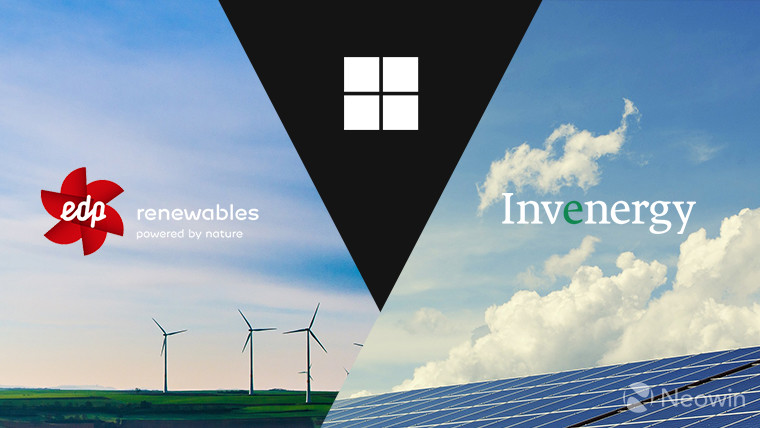 Following previous partnerships with Sunseap in Signapore, GE in Ireland, and Vattenfall in The Netherlands, Microsoft has announced a brand new pair of partnerships centered on renewable energy. Whereas the aforementioned ones were external to the U.S., these two new ones are domestic.

The first concerns Invenergy, with whom the Redmond giant has a 15-year power purchase agreement (PPA) in place to become the sole offtaker of 74 Megawatts from the former's Wilkinson Solar Energy Center in North Carolina. This is the largest such facility in the state, and is expected to begin operation later this year, with its construction generating 500 jobs. On the partnership, Brian Janous, Microsoft's general manager of Energy and Sustainability, had this to say:

“When we invest in renewable energy, we are investing in the future — enabling sustainable growth of our business, of the clean energy sector and the local communities that benefit economically from Microsoft’s commitment to sustainability,”

“Our work with companies like Invenergy is an integral step toward our goal of enabling a clean energy future for everyone. We are pleased our partnership will bring new solar resources to the PJM region.”

For folks not familiar, the PJM region referred to in the quote is the one operated by PJM Interconnection, a regional transmission organization that's part of the Eastern Interconnection grid which serves Delaware, Illinois, Indiana, Kentucky, Maryland, Michigan, New Jersey, North Carolina, Ohio, Pennsylvania, Tennessee, Virginia, West Virginia, as well as the District of Columbia.

In addition to the partnership above, Microsoft also announced a deal with EDP Renewables for two 15-year PPA (power purchase agreements) which would total 125 Megawatts. The electricity will be provided by the Timber Road IV Wind Farm, the construction of which will take place in Ohio's Paulding County - approved by the state's Power Siting Board on February 21, 2019.

During construction, the farm is expected to generate 200 "full-time equivalent" jobs, with seven full-time positions being present during regular operation. Timber Road IV is expected to be operational this year, though no exact date was given.

These two partnerships above bring Microsoft's total directly purchased renewable energy portfolio to almost 1.4 Gigawatts, and represent another step towards the company's goal of 60% carbon-neutral data center operations by early 2020.