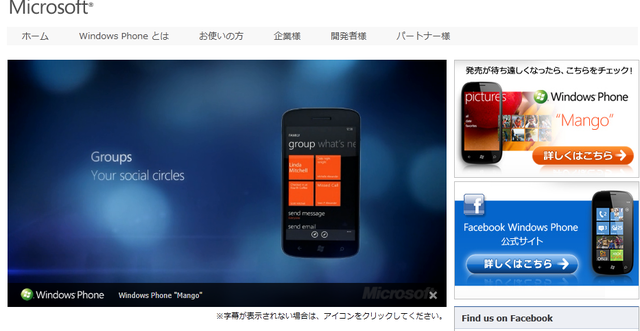 Microsoft has been working hard to promote its upcoming software update for its Windows Phone platform. While we do not know the official date that the update will be rolled out, Microsoft Japan has just launched its ‘Mango’ website only moments ago.

First picked up by WPcentral, the new site can now be viewed by visiting this link. For Microsoft, ‘Mango’ will level the playing field in terms of its competitors and will also bring new features to the table. It is also the first large update since the previous ‘NoDo’ update was sent out earlier this year.

While this website does not give an expected date of release, the fact that Microsoft has gone live with a Mango based website does provide hope that we are getting closer to the actual launch of the new platform.

For Microsoft, Windows Phone is the next generation of their mobile platform. While the OS has yet to take a substantial portion of the market, a lucrative deal with Nokia could help provide the boost that Microsoft is looking for. Couple new hardware with a major update to a platform that is receiving positive reviews all over the place and Microsoft is positioned to make big steps into the retail market wars.