2 billion minutes every day spent by users on Skype. 400 million active users on Outlook.com. 18 billion hours of entertainment last year on Xbox. 170,000 apps on the Windows Phone Store. These are just some of the statistics that Microsoft has shared on its new 'By The Numbers' site. 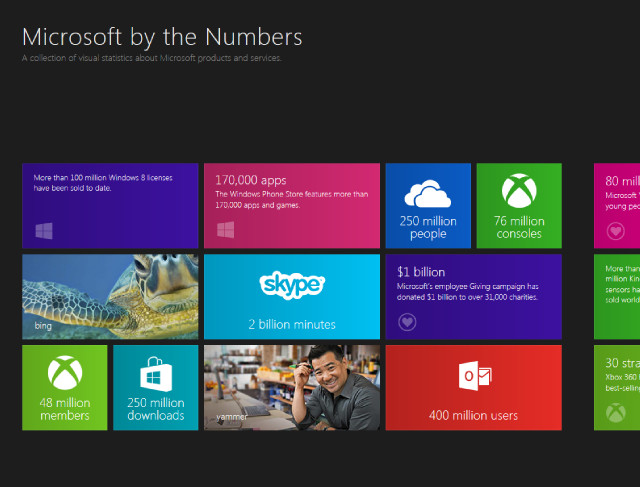 The company has fully embraced its corporate design language in the creation of the site, with a layout reminiscent of the Windows 8 Start screen, with a horizontal panorama featuring Live Tiles of different widths and colours - each representing a different corner of the Microsoft empire.

The stats that the company has included on the page are, broadly speaking, fairly familiar. There are no big new revelations, such as the exact number of Windows 8 licences sold to date (the figure quoted on the site of 100 million sales is now over three months old), or any details on Surface sales (in fact, Surface isn't even mentioned on the page).

Even so, there are couple of unusual insights. For example, did you know that 2.6 billion gallons of free beverages are consumed every year on Microsoft's Redmond campus? Or that 554,000 slices of pizza are eaten every year in the company's cafeterias? Or that there are 4,728 works of art in the Microsoft Art Collection?

Check out the site in all its Metro-style glory - but if you tire of big colourful boxes and animations, you can always download the far less visually stimulating text-only PDF version.