If you were lucky enough to pre-order the Microsoft Surface Studio, get ready to hold down your excitement, as the company has started sending pre-shipping notifications to users who pre-ordered on the first day .

It's a slightly ambiguous move by Microsoft. Pre-ordered devices were originally slated to ship on December 15th, but was rescheduled to sometime in early 2017. According to Brad Sams, a writer for Thurrott, early buyers can now expect their device to be processed and delivered this week, if you ordered the device during the first day of availability. The news comes after a user tweeted an image from an email they received from Microsoft, as seen below. 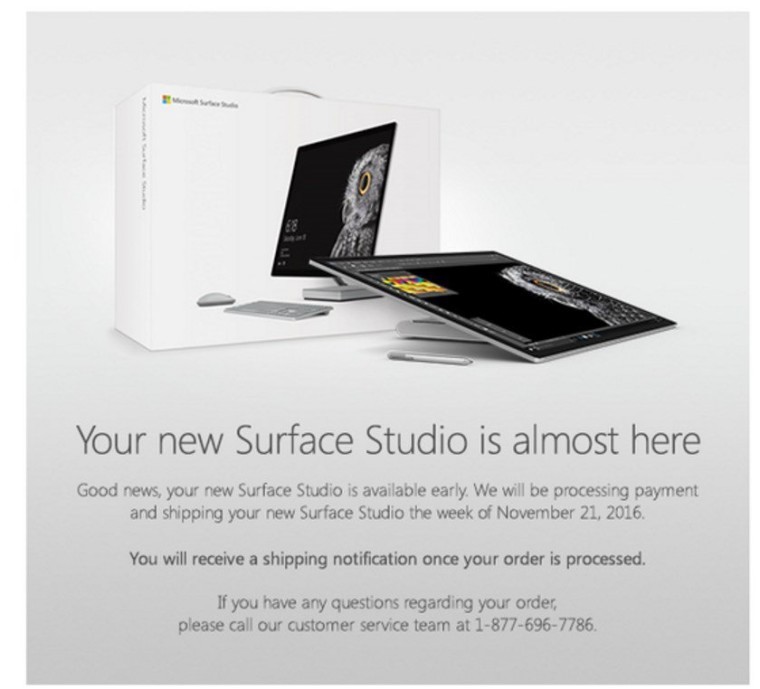 The Surface Studio has been met with critical acclaim, praising the device not only for its gorgeous screen and beautiful design but panning it for its steep price point.

Whether or not the price is justified, it is clear Microsoft is relentlessly targeting a niche market, hoping to win over creative types alike. One can assume Microsoft shouldn't have too many problems, as the Surface brand has reinforced itself as a trustworthy and strong competitor in the market.

While there will always be two sides to the coin, it is hard to disagree with how eye catching the Surface Studio is. The Studio's bespoke craftsmanship would surely complement the pristine and sterile environment studio spaces are often known for. Perhaps at this point, it is anyone's guess, but it will be interesting to watch Microsoft at least try to infiltrate the artistic market, and hope it works in the company's favor.

If you have pre-ordered the Surface Studio on the first day it became available, be sure to check your emails for a confirmation from Microsoft that your device will be shipping soon.