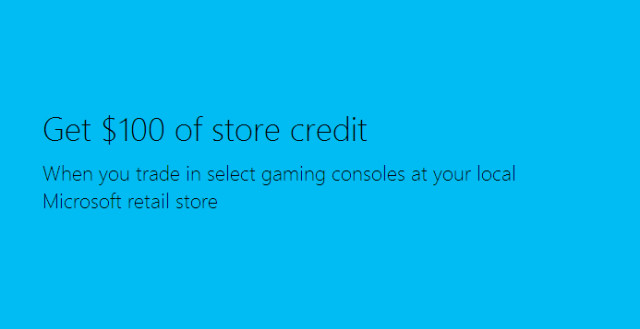 Today Microsoft announced its intentions to offer a $100 store credit at any of the 31 participating Microsoft Stores for anyone who is willing trade in their old console. Consoles eligible for trade include the Xbox 360 S and the Xbox 360 E, two of Microsoft's newer 360 models, but they also offer the credit for anyone who brings in a Sony Playstation 3.

According to the release, the offer extends from Jan. 23 to March 2, and while Microsoft is technically offering up to $100, you only receive the full value if you apply it toward a new Xbox One console. In addition, any console you bring in for trade must be in working condition and include all of the original parts, which is likely Microsoft's way of making sure it doesn't get short changed on the deal.

The offer comes shortly after the purported leak of Microsoft's 2014 plans for the Xbox One, which include an all-white model and a cheaper version without an optical drive. The gaming console has experienced significant sales over the past few months, including news that the Xbox One led sales in December, as well as Microsoft's recent announcement that 3.9 million Xbox One units had been sold to retail stores during their last quarter.