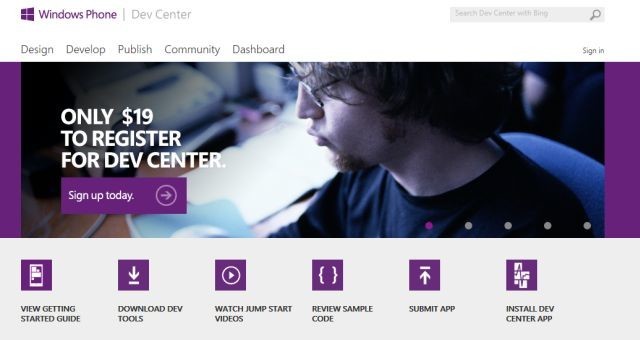 A few weeks ago, Microsoft announced that it was keeping its summer promotion price of access to its Windows Phone Dev Center to just $19 a year beyond its planned expiration date. Today, Todd Brix, general manager of the Windows Phone Apps and Store team, announced that lower fee is still for a "limited time only" but also revealed some new features for developers making apps for its OS.

In a post on the Windows Phone blog site, Brix said that the company has made new partnerships with a number of third-party online ad networks that should result in an increase in ads for apps that generate revenue from that business model. Brix said, "We expect to see a small increase in fill rate in October, with increasing growth expected over the coming months as more networks are integrated."

Those third-party networks will also be provided with unique device IDs so that they can target ads for each Windows Phone user. Brix said that the device IDs will not be linked to the user nor to any personally identifiable information. Windows Phone owners have the option to opt out of seeing any targeted ads generated by Windows Phone apps.

Brix also revealed that payments to Windows Phone app makers will be made much faster from now on. Previously, the company had to wait to receive payments from wireless carriers before they paid app developers, but Brix says that method was causing delays of as long as 120 days before payments were made. Today, he said all app transactions that come from wireless carriers will be paid out in 30 days. Brix added:

The Windows Phone Dev Center site has also been updated to show developers the amount of money an app has generated but has yet to be paid, along with the status of the last payment. Additionally, the Dev Center app has been updated with a way to view the submission status of an app, a review filter feature and more.