Microsoft could be working on significant changes to its Surface Dial in the future, if a recently-discovered patent is any indication. The potential changes would make the accessory a more suitable replacement for a conventional mouse.

Spotted by Windows Latest, the patent simply titled "Peripheral user-interface device" describes some of the same functionality of the current Dial, such as the rotating mechanism, but it goes a step further. The patent envisions a touch-sensitive surface on the top surface of the accessory, possibly replacing the button on the current iteration. It might even support multi-touch for gestures such as pinch-to-zoom.

But the purpose of this may not necessarily be to use the touch-sensitive area as a trackpad to replace your mouse. The patent also mentions the possibility of a "mousing sensor", such as a trackball or an optical sensor, on the base to detect the Dial's motion in relation to the surface it's laid on. This would make it possible to use it as a more traditional mouse, which many users tend to prefer.

On a slightly less impressive note, Microsoft has also patented a new mechanism relating to the Surface Pen. This one refers to a new method to absorb shock in the battery compartment of the pen, which is meant to replace the coil springs that are more commonly used in electronic devices. 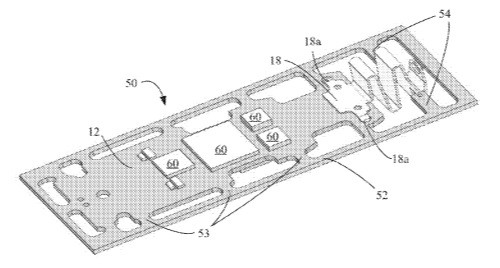 Battery contact with the printed circuit board (PCB) can cause damage, which is why these methods are used, but Microsoft's patents says that the springs need to be installed in a separate process from the assembly of the PCB, which increases production costs and reduces efficiency. Microsoft's patent describes a design in which the shock absorption component is assembled as part of the PCB, which should make the process easier.

Of course, we've seen a lot of patents coming from the Redmond company, and it's never guaranteed that they make it into a final product. But the specificity of the technologies does indicate that Microsoft could be seriously considering their inclusion in future versions of the Surface Pen and Surface Dial.