In January, Microsoft announced that it was extending its Bing Rewards program in the U.S. to mobile phones such as iOS and Android. However, until this week, the mobile experience wouldn't allow users to gain any extra points. That has now changed, as Microsoft has quietly added a way to generate additional credits by searching on Bing via its mobile-only website. 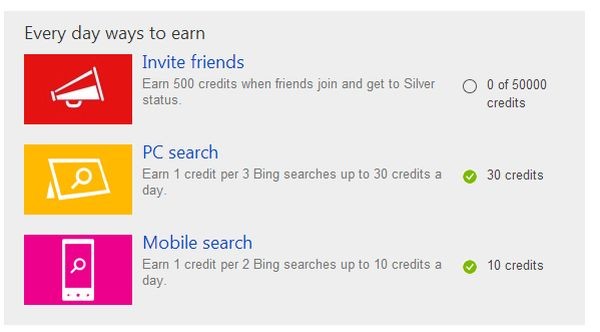 The dashboard for the Bing Rewards program now shows a "Mobile Search" option that will allow people who are signed up to get up to 10 additional points per day for searching on the mobile site up to 20 times. Previously, points could only be generated by searching on the main Bing website, up to 30 points per day.  The 10 additional points can be redeemed to purchase items like gift cards, sweepstakes entries and more.

The Mobile Search option is apparently available just for iOS and Android phone users. WPCentral reports that some Windows Phone owners are seeing Bing Rewards support on their phones, though two Windows Phone devices used by Neowin staff members don't yet have the feature. It's possible Microsoft is rolling out Bing Rewards to a select number of Windows Phone users for testing before launching it officially.