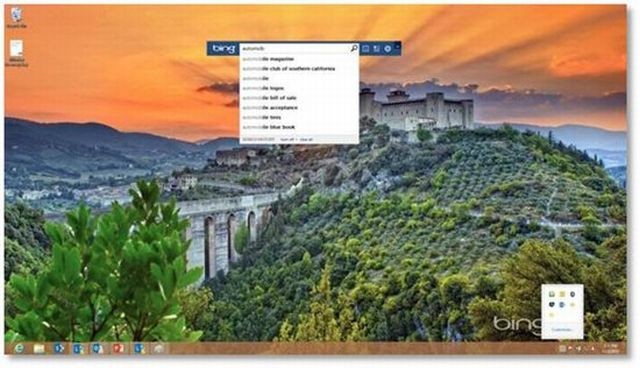 In April, Microsoft released the first beta version of Bing Desktop for Windows 7 which added a stand alone Bing search bar in the center of the desktop screen. It also can change a user's desktop wallpaper every day with the same image found on the Bing.com site.

Today, Microsoft released version 1.1 of the Bing Desktop and it has now added support for Windows 8 along with older versions of Windows (XP and Vista) and Windows Server 2008 and 2012. The new version also adds support for four more languages (French, German, Chinese and Japanese)

To start searching, simply click on the Bing taskbar icon, or the Bing tile on your Windows 8 Start screen, and the search bar will automatically appear at the front of the screen. Type in a search term or phrase using the autosuggest keywords or your search history, and the search results will appear in your default browser. You’re off and running in a matter of keystrokes. When not in use, the search box recedes into the background to maximize precious screen space.

Bing Desktop has also added a content icon to the search bar that offers up the top news items, trending images and video and more when a person clicks on it. Finally, the Bing desktop wallpaper feature in Bing Desktop can now access the last nine days of wallpaper from Bing.com, just in case you are away from your PC and missed a few of the images.