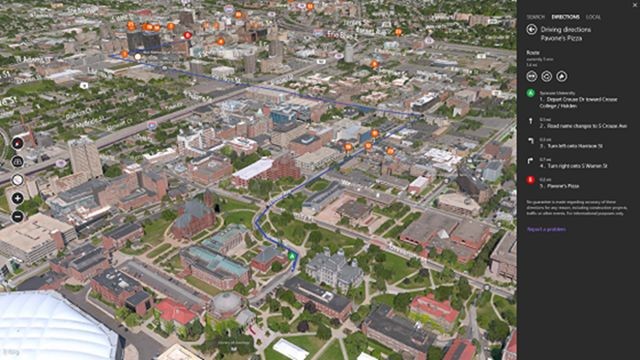 Back in June, Microsoft announced at the BUILD conference that it would launch a new version of Bing Maps with 3D support. Today, the company launched a preview version of that 3D map feature via a new app for Windows 8.1.

The Bing Maps Preview app is now available for download on the Windows Store as a Windows 8.1 exclusive. The app renders over 70 cities around the world in photo realistic 3D but don't expect to see huge cities like NYC or London in 3D in this preview app. Microsoft has concentrated on making these maps in smaller cities like Greenville, South Carolina. A full list of all the 3D rendered locations can be found on Microsoft's site. Some parts of the cities can also be seen from the ground in what Microsoft calls its Streetside viewing mode; it's their version of Google Maps' Street View.

The Bing Maps Preview also can overlay information about landmarks and places of interest on top of the 3D maps. In a post on the Next at Microsoft blog, it talks about how Microsoft's Geospatial Content and Publishing team in Boulder, Colorado came up with the 3D maps:

As you can imagine, the team doesn’t use your typical off-the-shelf point-and-shoot for these efforts. Instead, they use Microsoft’s own UltraCam Osprey to capture aerial photographs, and UltraCam Mobile for street side imagery – two world-class sensors developed and built in Graz, Austria. The latest models of UltraCam cameras create 54-megapixel images using a specially modified lens that simultaneously takes pictures straight down, as well as to the left, right, forward and backward. For every geographic point, roughly 40 overlapping pictures have been taken – a bit like an enormous PhotoSynth.

The images are then corrected back in Boulder so that the pictures look good from a top-down perspective without any visible distortion. So far, the team has created a whopping 121 trillion pixels worth of data for the Bing Maps Preview app.