A few weeks ago, Microsoft revealed a long list of countries that it said would finally get their hands on its Surface Pro tablet “before the end of May”. One of the countries on that list was the United Kingdom, and there’s good news for Brits today, as the Surface Pro has finally gone on sale there, almost a year after the tablet was first announced, all the way back in June 2012. 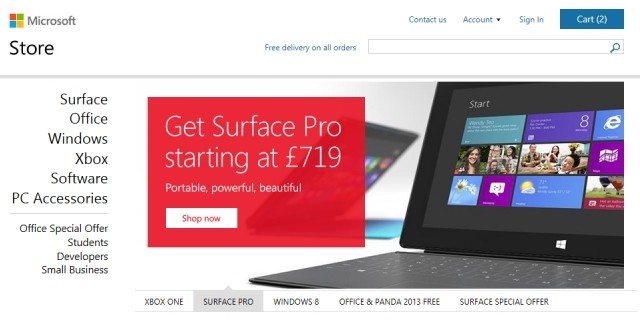 Priced at £719 for the 64GB version or £799 for the 128GB version, the Surface Pro gets top billing on the company’s UK homepage today, along with a prominent banner greeting visitors to the Microsoft Store UK website.

But TechRadar reports that the online Microsoft Store won’t be the only place that customers can buy a Surface Pro. As with the Windows RT version of the tablet, the Pro will also be sold in John Lewis department stores across the country. It will also be made available online at pcworld.co.uk, with selected PC World stores also getting stock. The first 20 people to purchase a Surface Pro from the flagship John Lewis store on London’s Oxford Street will also get a free one-year subscription to Office 365.

If you’re still undecided about whether or not to buy a Surface Pro, be sure to check out our review.