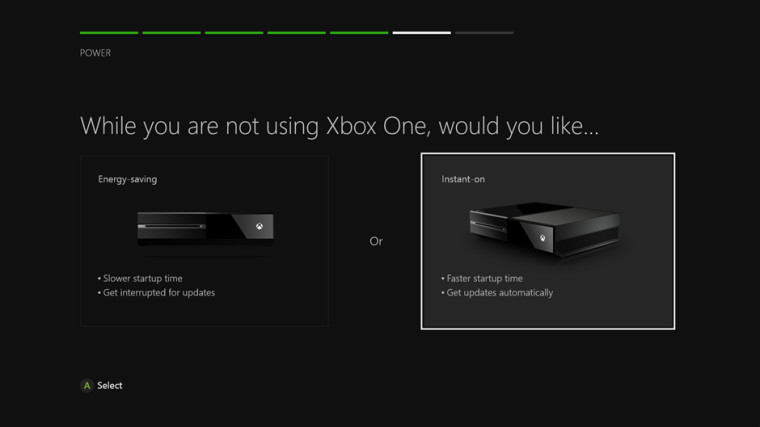 Following recent criticism from an environmental advocacy group, Microsoft is adding a power-choice screen to the setup process for new Xbox One consoles.

On March 26, the National Resource Defense Council penned a blog post criticizing Microsoft for the default "instant-on" power mode for its newest gaming console, which the environmental group called a "poorly designed feature" that eats up power. In response, Microsoft has today announced it will add a screen to the setup process for new Xbox One consoles that allows users to pick between the instant-on mode or an energy-saving mode.

Microsoft says the instant-on mode costs the average U.S. customer about $6.50 to $15.50 a year in energy consumption, while the energy-saving mode typically costs between 26 and 62 cents per year. The NRDC report claimed disabling the instant-on mode could save taxpayers a cumulative total of up to $250 million per year, with the organization imploring Microsoft to add a way "to make disabling the mode easy at set up."

Xbox One owners have always had the option to choose between the two modes, though the new screen shows the choice more prominently than ever before. Microsoft's screen also notes the drawbacks of choosing the energy-saving mode, however: Users who pick the mode will be faced with slower startup times and won't be able to maintain downloads when turning off their consoles.

In addition to the new choice screen, Microsoft states it will continue to reduce power consumption of Xbox One as it did with Xbox 360, noting that it's reduced power consumption used by the instant-on mode by over a third since launch.