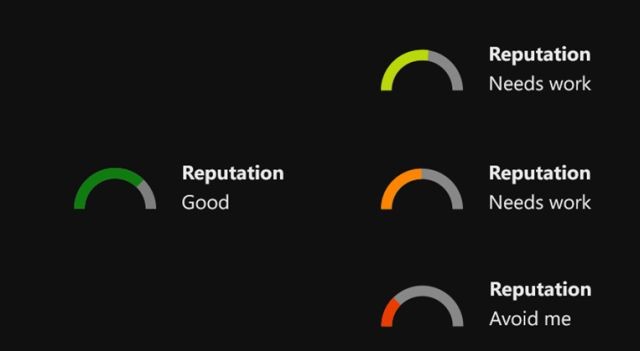 The launch of the Xbox One console in November also introduced the idea of online player reputations for Microsoft's game console. Today, the company announced that it will begin to send out notifications to players who need to boost their reputation scores.

As we have previously reported, Microsoft uses colors to represent Xbox One player reputation levels, with "Green" linked with "Good Player," "Yellow" meaning the score "Needs Work" and "Red" standing for "Avoid Me." In a post on Xbox Wire, Microsoft stated, "Beginning this month, some players will start receiving reputation warnings as their reputations drop due to feedback from the community."

If a player sees his or her online reputation fall into the Red level, they may experience limitations on playing games on the Xbox One until they can boost their score up. That may also include not being able to broadcast games via the Twitch app. On the other side of  the equation, Microsoft says it has plans to offer rewards for players who are in the green and have been rated as having a good online reputation. Details about those plans should be released in the future. Microsoft insists that their algorithm will adjust if some people attempt to make false reports against Xbox One players.