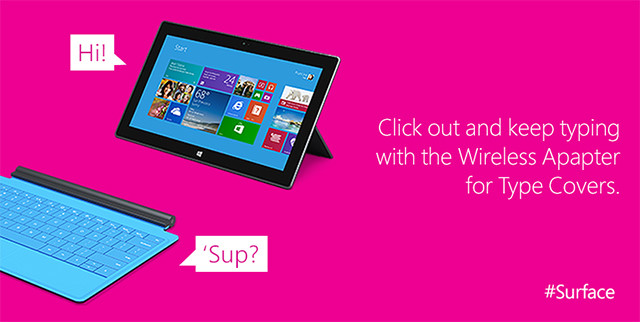 Well, this is odd. Microsoft quietly discontinued its Surface wireless adapter for keyboard covers recently, and now it's decided to start promoting the accessory, something it didn't do before.

Early Wednesday, ZDNet's Mary Jo Foley reported that Microsoft was no longer making the accessory, which a Microsoft representative later confirmed, saying the move was a result of “a number of factors,” though exact reasons weren't provided. Despite the news, however, Microsoft's social media team tweeted out a message promoting the wireless adapter mere hours later. The above image is attached to the tweet, which is still posted, likely meaning it wasn't made in error.

Amusingly, this appears to be a rare instance of the accessory actually being promoted. Of the Twitter account's other 296 images, only one featured the accessory, and it was tweeted Oct. 2, shortly after the wireless adapter was announced alongside the Surface 2 and Surface Pro 2. That tweet wasn'​t actually promoting the wireless adapter, however, just all the new accessories that were announced at the time.

Either Microsoft forgot to tell its social media team that the accessory was canceled, or it's decided to finally start promoting the adapter in an effort to get rid of its inventory. Either way, rest in peace, Surface Wireless Keyboard Adapter. Clearly Microsoft didn't love having you around, but it sure does love killing you.