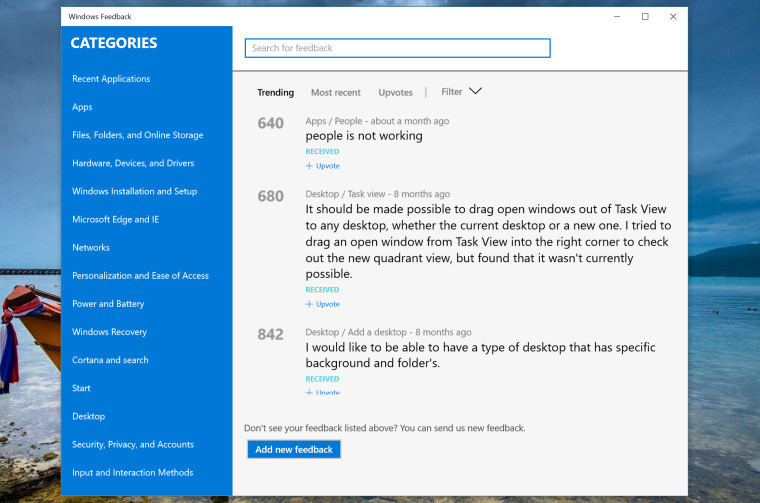 Microsoft's Windows Insider Program, introduced in October 2014, has played a crucial role in the development of Windows 10. In addition to providing participants access to pre-release builds of the operating system, the Insider Program provides access to the Feedback Hub app, allowing participants to stay up-to-date on the latest news, share comments or suggestions, rate pre-release builds, and show support for content posted by other users.

Enrolling in the Insider Program has its drawbacks, however. Pre-release builds are—as their name implies—incomplete. Users can, for instance, experience issues related to stability. Of course, not all Windows 10 users are Windows Insiders. Microsoft has recently acknowledged the need for direct feedback from users who are not enrolled in the Insider Program, by making its Feedback Hub app available to all users of its latest operating system.

Microsoft's decision means that non-Insiders can now enjoy nearly all of the aforementioned benefits, but without all of the issues that are the result of pre-release software. It should be noted that a report by Windows Central suggests that some of the content in the Feedback Hub remains exclusive to Windows Insiders, which makes sense as users have no need to rate pre-release builds that they are not actually using. Nevertheless, all users should now be able to share their feedback about the current release of Windows 10 and its features.

The Feedback Hub app is now available for direct download from the Windows Store.