There's Facebook, Twitter, LinkedIn, Pinterest, Instagram and even MySpace, but it's likely that most people have never heard of the social networking service called, well, Socl. Microsoft Research, under its FUSE Labs division, quietly launched the network over two years ago under its original name Tulalip, and officially revealed its plans in December 2011 under its current name. 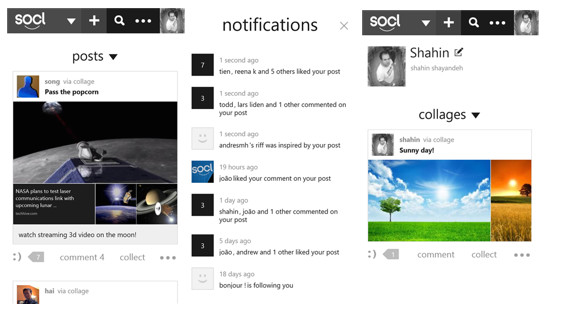 Up until this week, people who signed up for Socl could only access it via a web browser but now Microsoft has launched mobile apps for the network. Microsoft has only posted word on the Windows Phone app on its blog, but WMPoweruser has also spotted iOS and Android apps that are now available to download.

All three apps not only allow Socl users to connect with each other but they are also designed to let them create picture collages and animated memes that can be shared on the network as well as other places. The fact that there are now apps for all three of the top mobile operating systems for Socl would seem to suggest that Microsoft Research wants to expand the reach of the network. It will be interesting to see if Socl will become more popular in the months ahead. By the way, Microsoft has never revealed how many people have signed up to use Socl.