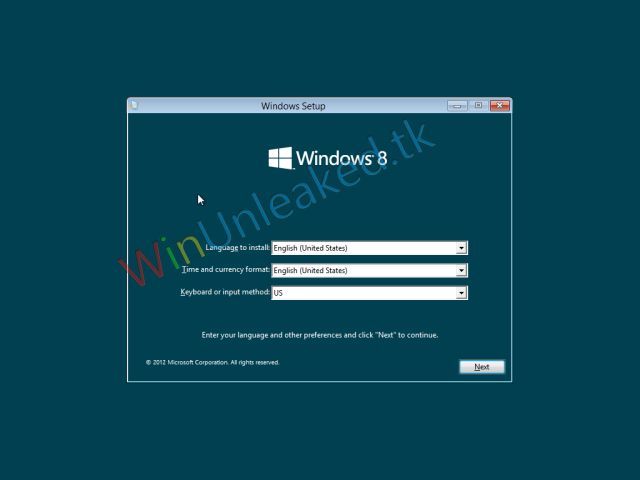 This weekend, the Windows 8 news site WinUnleaked.tk revealed that it had received a copy of a pre-release candidate version of the OS. The site offered up some tidbits of information about the build, and also stated that the Release Candidate version was being targeted by Microsoft for a public release sometime in late May or early June.

Now WinUnleaked.tk has posted a few more screenshots from this pre-RC build. The screenshots are pretty minor but do have a couple of interesting little features. In the screenshot above, the Windows 8 Consumer Preview Setup label has been changed simply to say Windows Setup.

Other screenshots show the product key screen, the EULA screen and the new color customization screen which was leaked by another site a few days ago. There's also the black boot screen which the article says has a loading bar that looks like the one found for Windows Phone.

The site promises to show and tell more about this leaked Windows 8 build in the near future. Microsoft is reportedly planning to finish development of Windows 8 sometime this summer in time for a planned commercial launch for both the X86 and ARM versions in October 2012.