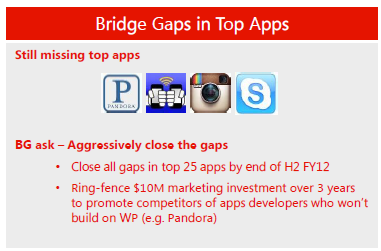 While the Windows Phone Marketplace has been adding more and more apps for Windows Phone users, the app download store still lags behind the iOS App Store and Google Play (previously Android Market) in both the number of apps and in what kinds of apps are available. However, it looks like Microsoft is going to make some efforts to help promote Windows Phone apps.

ZDNet.com reports that in a leaked slide presentation from Microsoft, it reveals plans to spend as much as $10 million over three years to help promote Windows Phone apps. The specific program will be targeted at app developers who make competing software for iOS and Android apps  that for some reason do not which to make apps for Windows Phone. The streaming music service Pandora is specifically mentioned as one of those app competitors.

According to the slide presentation, Microsoft hopes to "close all gaps in top 25 apps" by the end of the company's fiscal 2012 year which ends on July 31. The company also wants to focus on quality Windows Phone apps rather than quantity going forward and have more exclusive apps for Windows Phone devices. It may also take another look at  its pricing model for Windows Phone games, including looking at "parity" with prices versus those on the iPhone.