Mr. Shifty is a top-down action game that has you infiltrating the base of Chairman Stone, a man that has shady ties to the underworld and is in possession of ‘Mega Plutonium’. Your goal as Mr. Shifty is to make your way through over 100 levels that span 18 stages and consist of traps, mobs, and other obstacles - with the sole purpose retrieving the aforementioned plutonium. 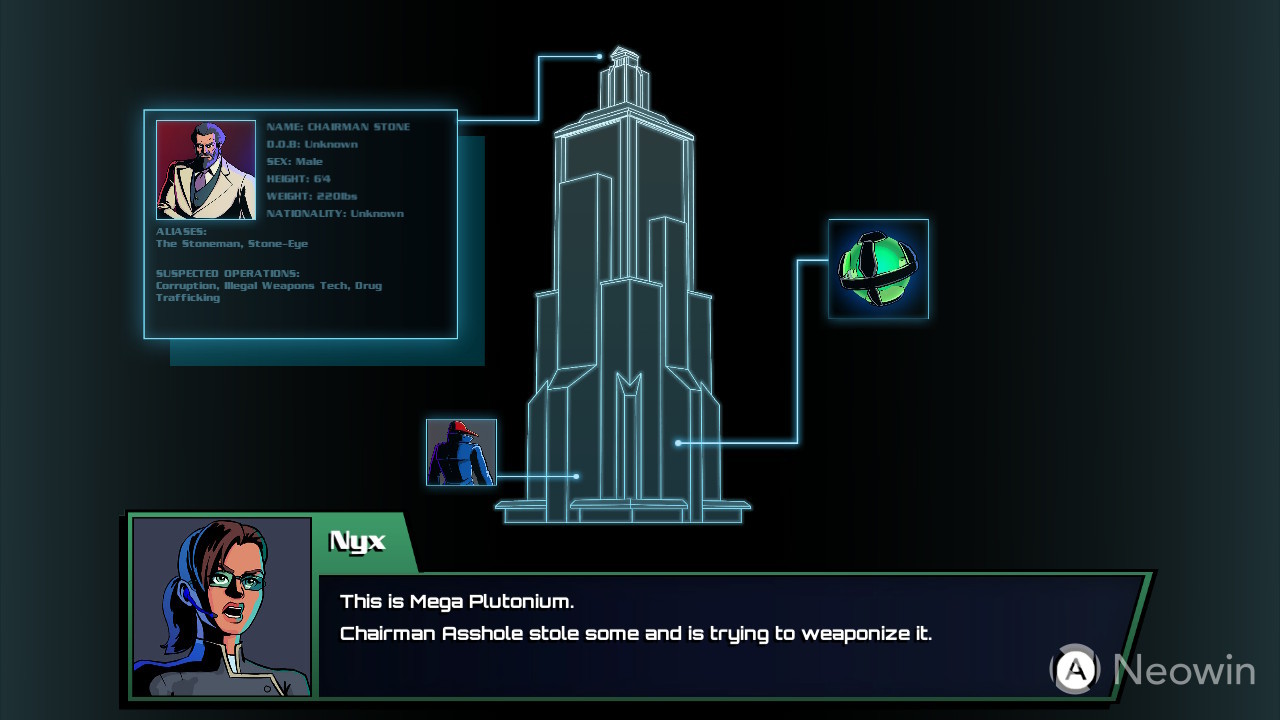 For any normal human being, this would probably be a difficult task. Luckily, your character has the ability to shift, which means you can teleport short distances, even through a majority of walls. The skill can be used up to five times in quick succession and when depleted, can be recharged by waiting a few seconds. Along with your ability to shift, the only other weapon in your arsenal is the use of your fists and occasional picking up items that can be used as weapons or projectiles. But for the most part, you’ll have to rely on your fists and speed to get through and complete your mission. 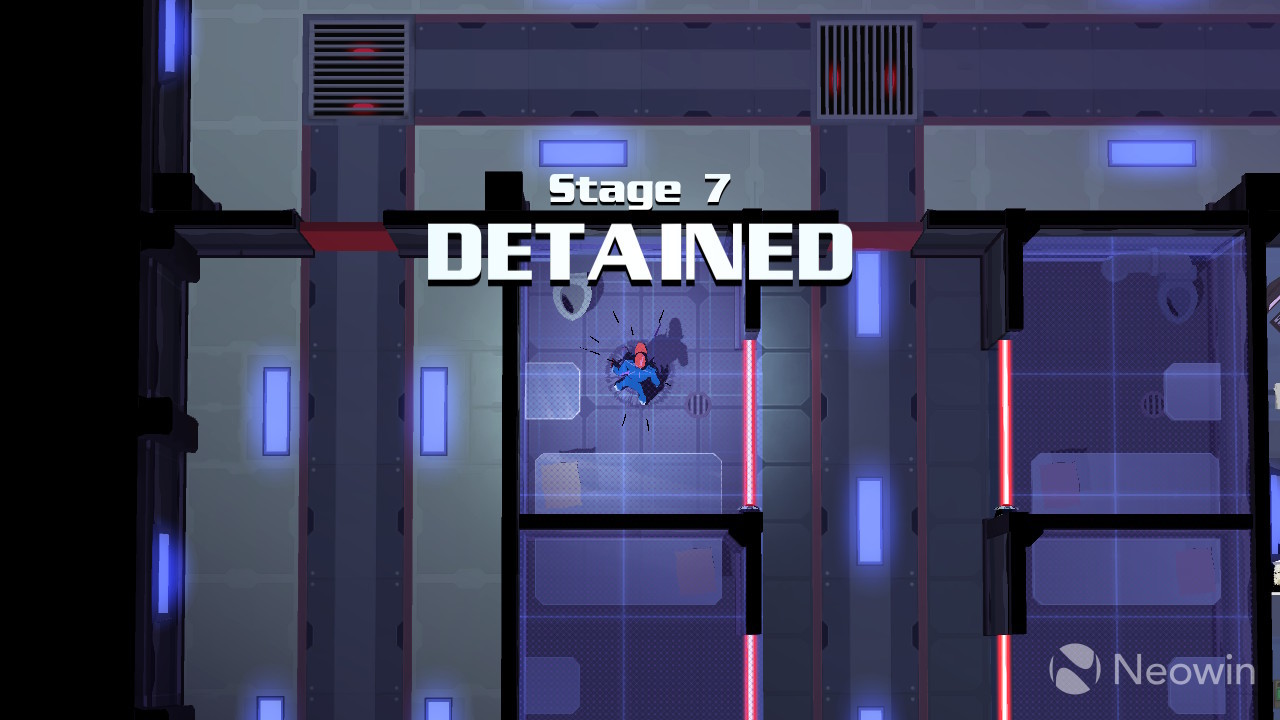 The first few levels are meant to be a kind of tutorial, showing you how the controls work. It isn’t the most detailed tutorial, but the game isn't that complex, and you can pretty much figure out the rest as you go. By the time you clear the first stage, you’ll learn one of the more critical details about the game - your character cannot take more than one hit. This means that as soon as one punch, bullet, or laser hits you, you are dead. If there is one saving grace mechanic that counteracts the one hit death, it’s the “slow-mo” ability. 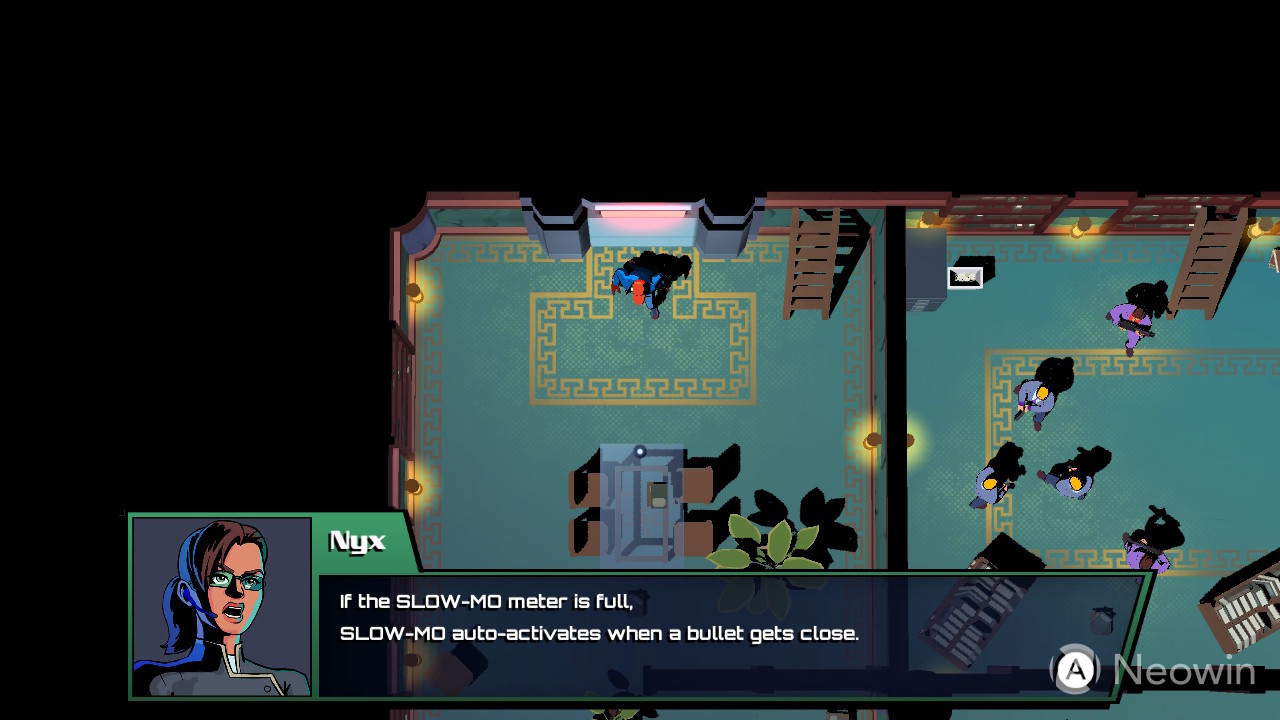 As the name implies, once activated, everything slows down. The ability is automatically activated when a projectile or attack is too close for comfort, allowing you to gracefully avoid danger. The skill can only be used when you have gathered enough energy, which can be done by eliminating numerous enemies in succession. If you fail to top up the gauge, it will slowly deplete. This can make it a bit tricky to secure the slow-mo ability, and usually only happens when in very densely populated levels. 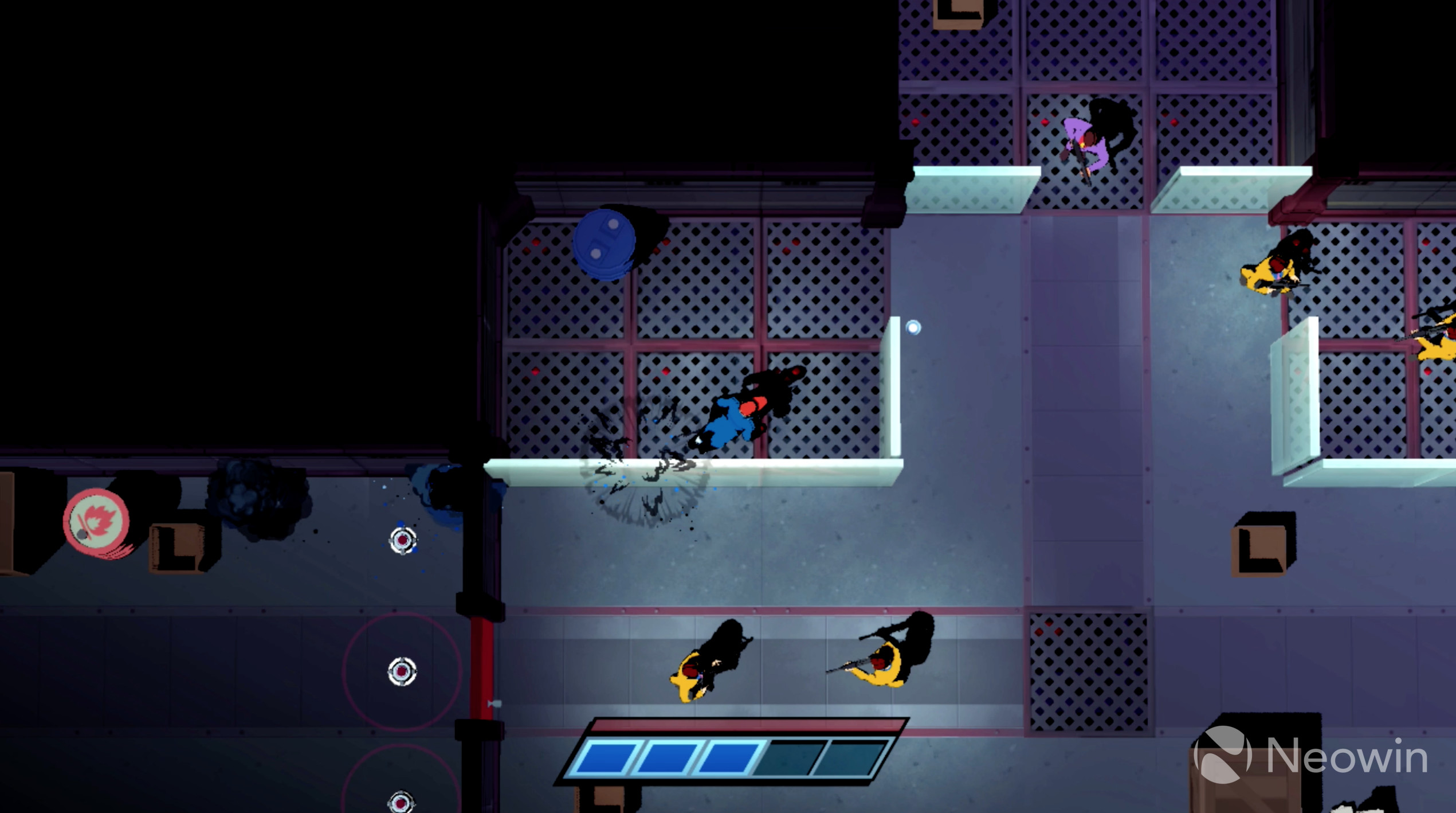 Now what you will probably notice after playing the game for a tiny bit is that the music and stage textures aren’t really varied. A quick search shows the entire game OST is around 16 minutes. While you might be immersed in the title to let the songs fade into the background, by the third stage, you’ll get a bit tired of it. When it comes to the setting, this can get a bit stale as well. What's more, upon entering a stage you're not really blow away, as it looks just the same as the last one. Perhaps, that’s why it's so hard to refer back to a level with absolute clarity, since it all just seems like one big blur.

By the second stage, things are getting a bit more complicated, you’re getting accustomed to running into foes, beating them down - but now the game gives you a bit more, and throws you into traps that require a bit more effort. These areas are probably the most satisfying parts of the game, because it requires patience, precise timing, and perfect utilization of your shifting powers. While fun, the game does seem unbalanced at times. For example, you would think there would be a natural progression in difficulty, but this doesn’t seem to be the case. Often times, I found myself progressing through the game at a steady pace, only to get stuck on a level that was extremely challenging, requiring multiple tries and deaths. After defeating the level, the difficulty would drop off to its previous state, allowing me to cruise through at a relatively brisk pace.

This also leads to another glaring issue with the game, which is the intelligence of the enemies. Since the game does not employ a skill level option at the start, you’re left with whatever the developers have deemed is a suitable for the game. This is perfectly fine, but it only really works if the enemies are fairly smart and give you a challenge. When it comes to the game, it’s a bit of a mixed bag. In some circumstances, the enemies react in a way that really makes you reconsider your play style, other times, (or rather, most times) the enemies are able to be strung along using the same bait maneuvers, taking away some of the fun of the game. Perhaps, worst of all is when the enemies are so dumbfounded by Mr. Shifty’s stylish getup that they completely forget to move, and this can happen countless times. That’s probably why the more complicated and crowded areas of the game are where it excels, since you can't really bait enemies and things just become harder to monitor, making the chaotic feel exhilarating.

The title isn't the most graphically intense game relying on cell shaded art, but playing this on the Nintendo Switch, you will see frame rates dip in more congested environments whether you're playing it handheld or in the dock. While this is a problem, the slow motion did tend to help during hectic situations, as sort of an unintended “bullet time”. Also, since we are on the subject of unintended situations, while it didn’t happen often, the game did crash a few times. This usually resulted in the loss of progress,because it wouldn’t continue from the level where you left off, but made you restart the whole stage all over again. This isn't something that happened frequently, but it should be noted.

After a solid six hours of playing the game, you’ll reach the end and realize that despite its issues, Mr. Shifty is a pretty fun game. It isn't about the story or its less than inspiring soundtrack, it's more about just getting in there, beating up some foes, and having at it. While there are things that I hope to see maybe in a future update or sequel, at $14.99, it's a satisfying title that does have its faults but doesn't leave a bad taste in your mouth when you're finished.