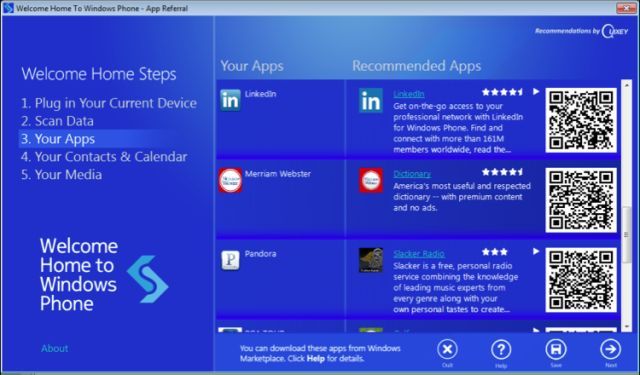 We are just a few days away from Nokia and Microsoft officially announcing their new Windows Phone-powered Lumia devices, although there have certainly been plenty of pre-announcement leaks about the hardware already. There will perhaps be some people who currently own a smartphone based on another operating system who could trade it in for these new Windows Phone products.

But what if you have lots of contacts, photos, music, video or even apps that you want to keep around from your previous smartphone? This week, developer Quixey announced a new and free Windows PC and Mac OS X app called, in a rather friendly tone, Welcome to Windows Phone. The software is now available for download on Mark/Space.

In a post on the Quixey blog, the company says that this app is made specifically for Nokia Lumia devices, although its possible that the app could work for any other Windows Phone device from HTC, Samsung and others. While transferring contacts, videos, photos and others should be straightforward, its the transfer of apps that could be the most interesting thing about Welcome to Windows Phone.

However, it sounds like the app actually offers recommendations to new Windows Phone owners on which apps to download rather than the physical movement of apps from phone to phone. The blog states:

Once Welcome Home to Windows Phone is installed onto the computer, users plug in their smartphone through a USB port and follow the simple steps to transfer their data. The software will recognize apps currently installed on the phone, and then find the exact match or a recommendation for a similar app on Windows Phone.

Via: The Verge
Source: Quixey blog | Image via Quixey