New Super Mario Bros. 2 is a new game from Nintendo which is coming to 3DS this August in Japan, Satoru Iwata announced at Nintendo’s direct livestream. The first screenshot was tweeted from Nintendo of America – showed the 2D title running on the 3DS.

The title itself looks near enough exactly like the first game for the original DS, so it would have been a better idea for Nintendo to revamp the visuals a bit more (aside from the obvious 3D feature) but that will not stop the game selling like hot cakes. Side scrolling Super Mario games seem to attract players of all ages and is one of the very reasons why the first New Super Mario Bros. title for the Nintendo DS has sold almost 16 million copies worldwide. 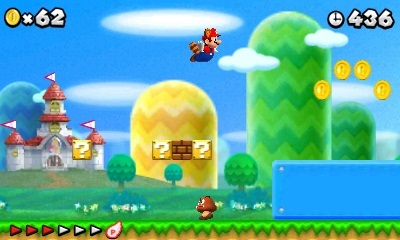 Aside from looking the same, the game offers new levels and power-ups which will leave Mario fans with a lengthy 3D side-scroller with lots of re-playability. Not much is known about the other power-ups or levels yet but we know they work around the traditional story of Princess Peach being kidnapped. We’ll learn more in the next month as we our way towards Nintendo’s E3 conference in June.