During Nintendo's Keynote today at GDC, President and CEO of the company Satoru Iwata revealed Nintendo's total shipped numbers for the DS and more importantly the Wii.

As of the end of December last year the Wii had sold in the region of 45 million consoles world wide, in an earlier announcement of units sold this time last year Nintendo said they would sell 25 million adding to the 24.5 million sold at the time, they have now reached their goal of shipping 50 million.

From NPD numbers released each month the Wii has managed to sell 1,432,000 in North America alone along with sales in Japan reaching around 350 thousand this year, with Europe and other regions making up the last of the 5 million.
With such huge sales the Nintendo Wii in the short time it has been out it compared to other consoles has managed to become the best selling games hardware to date.

Nintendo's DS portable console has also recently shipped over 100 million world wide, with the combined sales between the DS and Wii platforms, the recent release of the DSi along with its near release date for the US and EU and no sales of slowing down due to the tumbling economy Nintendo is once again leading the pack in the console race. 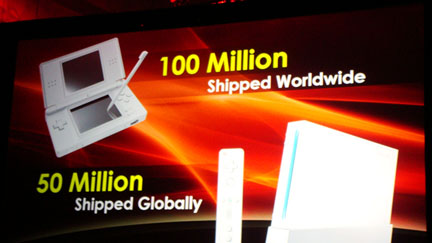