Nokia has announced a couple of new feature phones for those looking for a phone without all the clutter of a smartphone. The two phones are the fourth-generation Nokia 105 and the Nokia 220 4G.

Of the two phones, the Nokia 105 is the lower-end one. It doesn't have a camera anywhere, and it has a very small screen at just 1.77 inches with a QQVGA resolution. It has space for up to 2000 contacts and 500 SMS, and it has just 4MB of RAM. It runs on the Nokia Series 30+ software, and it comes with games like Snake, so there's that.

It has an 800mAh battery which should give you 14.4 hours of talk time or 25.8 days of standby time. It does have an FM radio and a headphone jack, but the micro-USB cable that charges it only supports USB 1.1, which is somewhat surprising in 2019. Oh, and it has a flashlight, a staple of Nokia feature phones. 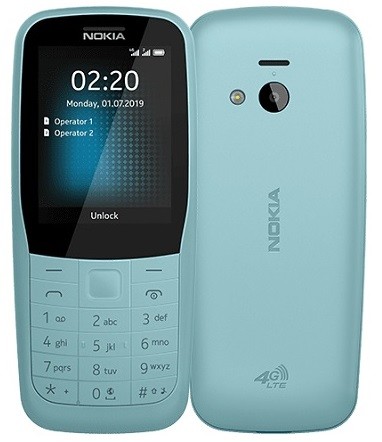 The Nokia 220 4G is a significantly more advanced package. It has a VGA rear camera and a 2.4-inch QQVGA display. The built-in FM radio doesn't require any headphones to be connected, which is somewhat unusual. It has 24MB of internal storage, 16MB of RAM, and of course, 4G, which enables HD voice calls on supported networks. It has a larger 1200mAh battery for up to 6.3 hours of talk time and 27 days of standby.

It also runs on what Nokia's page refers to as Feature OS. It comes with an internet browser and a built-in Facebook app, too. Of course, it also includes games like Snake and Tetris. The dual-SIM variant of the phone interesting opts for different SIM card sizes for the two slots - the main slot is nano-SIM, while the secondary one is mini-SIM.