The Lumia 900 has not launched yet in the US but Dutch retailer typhone.nl has posted up a Lumia 910 holding page complete with spec list.

The images on the site are of the AT&T Lumia 900 and considering the branding of 910, we would expect it to be the same device but most likely without the LTE radio. Another addition, according to the spec sheet posted on the site, which we can not confirm, says that the device will have a 12 MP camera.

It could be possible that because the device will not need an LTE radio, Nokia was able to place a higher MP sensor in to the device while maintaining the same cost as the Lumia 900. 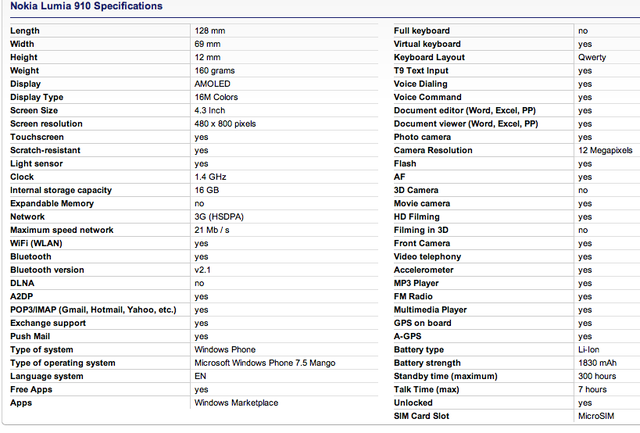 Nokia has not announced the Lumia 910 but we expect that it will be announced in the near future.

Nokia is betting big on the Lumia series and it recently announced that it has shipped over one million units during its latest earnings call. For Microsoft, Nokia is the company's best chance at making a serious dent in the marketplace as the company produces unique devices that other manufactures have yet to match.