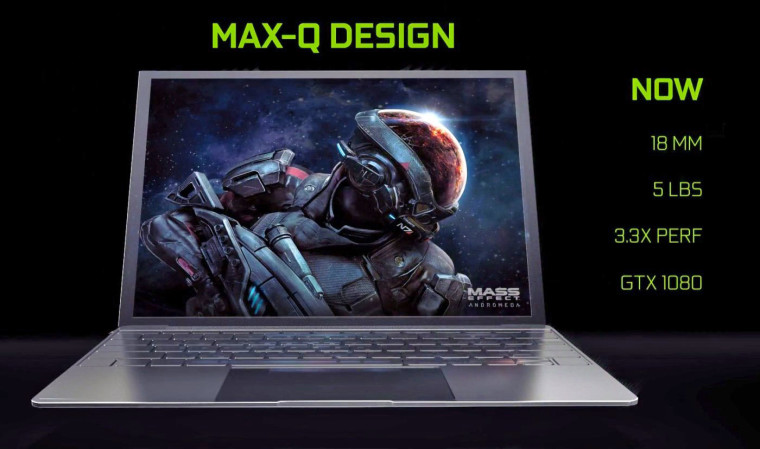 Desktop-class gaming on an ultramobile laptop has been gamers' ultimate dream for a long while now and it would seem that it's finally here. Last year, we saw the release of external graphics card enclosures to boost the gaming capabilities of notebooks and this year, Nvidia is making a big play on integrating some of its most powerful desktop graphics processors into laptops.

Dubbed Max-Q, Nvidia's new set of design guidelines for gaming notebooks seeks to provide the 'ultimate thin gaming laptop experience' with up to three times better performance on laptops that are three times thinner. All of this comes together in Nvidia's promise of enabling a top-of-the-line GTX 1080 to run on a device as thin as 18mm. In comparison, Apple's current MacBook Air is a slightly thinner 17mm without dedicated graphics.

The company achieves this via a holistic approach to the design of the notebooks, overhauling everything from the chassis to the components used to ensure that they're as thin as possible. Max-Q's design guidelines also make huge improvements in optimising thermal and electrical management, alongside creating new cooling systems, to reduce power consumption to half of similarly sized device, all the while offering as much as a 70% boost in performance.

These improvements culminate in a product that offers 4K gaming on a machine that doesn't look like a gargantuan beast and is not much larger or heavier than a MacBook Air, making mobile gaming truly viable.

A large number of Nvidia's OEM partners - such as Alienware, Asus, Acer, HP, and others - have signed up and will be releasing Max-Q designed laptop on June 27, which is also when pricing information will be revealed.