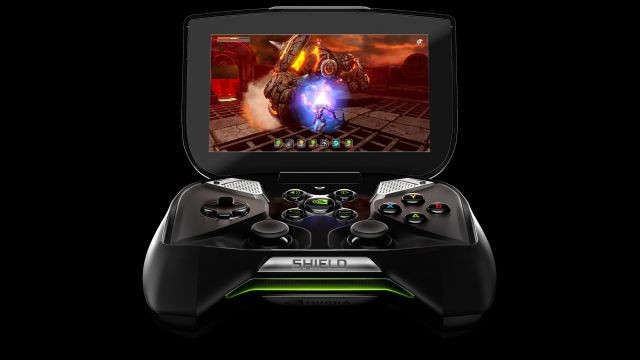 In January at CES 2013, NVIDIA surprised the crowd at its press conference with the reveal of Project SHIELD, an Android portable game console that could also stream Windows PC games on Steam. Today, NVIDIA revealed that the console has had a slight name change; it will now be called just SHIELD and it will be priced at $349.

NVIDIA's blog states that pre-orders for SHIELD will begin on May 20th to the general public but people who signed up to receive updates on the console's website have been given a way to start their pre-orders right now. The console will go on sale in June (no specific date yet) and will be available via several retailers, including Newegg, GameStop, Micro Center and Canada Computers.

The SHIELD console will be the first to have NVIDIA's Tegra 4 mobile processor with four CPU cores, 72 GPU cores and 2 GB of RAM. The console itself has a five-inch 720p display that's connected to a full sized game controller with dual analog joysticks, a full D-Pad, "left and right analog triggers, full-sized bumpers and A/B/X/Y buttons."

There's also 16 GB of storage, the latest version of the Android OS, a microSD slot, a mini-HDMI port, a micro-USB 2.0 port, support for WiFi and Bluetooth wireless and integrated speakers. The Steam game streaming support will be released in a beta version when the SHIELD console goes on sale and will require that the Steam PC to which the console connects has at least a NVIDIA GeForce GTX 650 desktop GPU or higher, along with either Windows 7 or Windows 8.