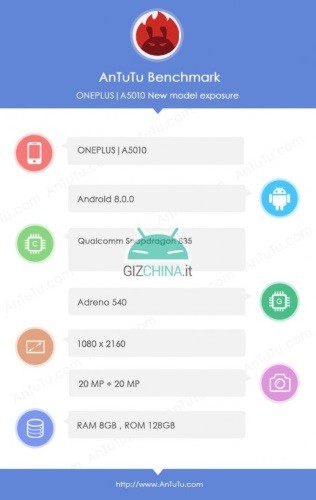 Over the past few weeks, we've heard several rumors about the alleged OnePlus 5T, including leaked renders and teaser image. Recently, the device made an appearance on the AnTuTu benchmarking website allegedly revealing some key specifications of the handset.

According to the AnTuTu listing, the upcoming OnePlus 5T with model number A5010 features a Qualcomm Snapdragon 835 and Android 8.0 Oreo as its operating system. In line with earlier rumors, the handset features an 18:9 display with a resolution of 2160 x 1080 pixels.

Most importantly, there's a dual-camera setup featuring 20MP + 20MP camera units for photos and videos. Last but not the least, the model spotted on the benchmarking website comes with 8GB RAM and 128GB internal storage.

There's no word from the Chinese manufacturer about the device, so you should take these details with a grain of salt. Although with more details leaking, OnePlus could decide to reveal the device at any time. So, we now just wait and see.