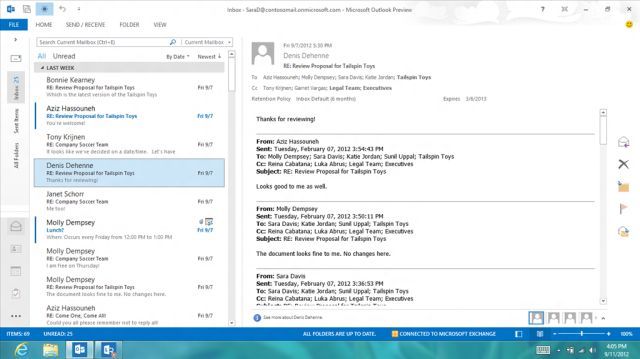 The recent launch of the Office 2013 preview version also included a look at an early build of Outlook 2013, the included email client software from Microsoft. Many users will access Outlook 2013 from a tablet, such as Microsoft's Surface device, or from a smartphone such as those being made for Windows Phone 8.

In a new Outlook post, Microsoft goes over some of the features that Outlook 2013 users can expect when accessing the software on a tablet or a smaller smartphone-sized screen.  For example, icons for major features such as Mail, Calendar, People, and Task are bigger for people to use with their fingers on a tablet. Outlook 2013 also has a new menu on the right side of the program called the Touch Actions Bar. Microsoft states, "It's conveniently located on the right edge of the screen so you can use your thumb to quickly perform common actions such as Reply, Delete, Flag and Mark Unread."

For a notebook-tablet hybrid device, the touch mode in Outlook 2013 may not automatically be available. However, it will have a Touch Mode selection in the Quick Action Toolbar that will enable the touch screen features manually.

For Outlook 2013 users with smaller screens, Microsoft says, "Outlook will detect that you are on a compact device, and collapse the navigation pane and ribbon by default just as it does for tablets. Email headers and the Outlook Social Connector use smaller pictures and shrink in size."