After the release of the HTC One M9, numerous reports have surfaced claiming that the company might also be working on a new high-end handset dubbed as HTC One A9.

The name of the device was first revealed by former leaker, Evan Blass. According to him, the device is code-named 'Aero', however, he did not reveal any details of the handset. Now, a new report has emerged claiming that the HTC One A9 could have 4 GB of RAM and a ten-core processor. 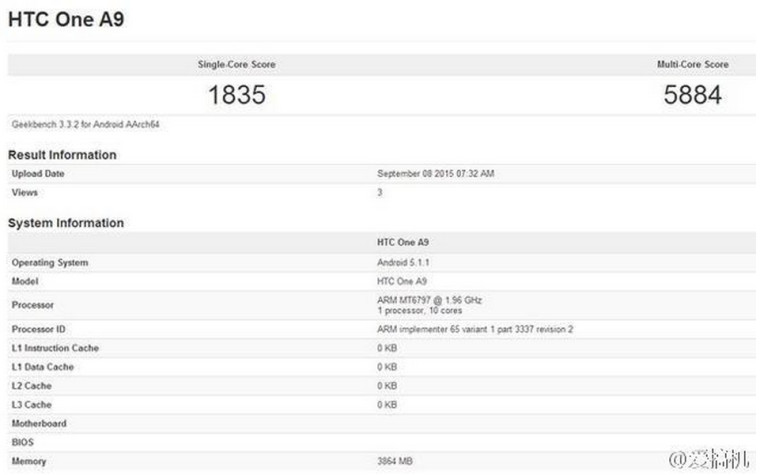 The source of this rumor is a purported benchmark image from Geekbench, which has revealed some of the alleged specifications of the device. According to this image, the HTC One A9 will pack 3864 MB of RAM, which obviously equates to 4 GB and will have a ten-core processor as indicated. It will purportedly be powered by Android 5.1.1 and will have a 1.96 GHz Helio X20 MT6797 processor.

Reports from other sources also claim that the HTC One A9 will have Full HD screen, however, some sources also allege a 5.5-inch screen with a WQHD display with a resolution of 2560×1440 pixels.

Given the fact that benchmark images can quite easily be falsified, and there is no concrete proof as of yet except a couple of alleged images, we can only advise you take this news with a rather large grain of salt.