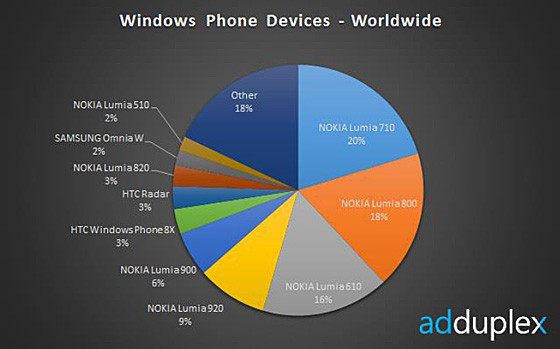 Every month, mobile advertisement company AdDuplex publishes statistics about Windows Phone. Although their newest report on December is due next week, some interesting statistics have already been revealed. When looking at the Windows Phone market, Nokia still holds the lead with 74 percent of the market, while Windows Phone 8 market share has grown from 5 percent to 20 percent in the United States when compared to November.

Nokia's flagship model, the Lumia 920, has grown from 3 percent to 9 percent market share and remains the best-selling Windows Phone 8 device, followed by the HTC Windows Phone 8X and the Nokia Lumia 820 which both account for 3 percent of the market. If you're living in the US and use a Windows Phone, the chance is 51 percent AT&T is your carrier.

The Lumia 710 is the most used Windows Phone as can be seen in the chart above, with the Lumia 800 and 610 just close behind. Samsung and HTC account for only a very small percentage of all Windows Phones.

The usage statistics come from WP apps that use software from AdDuplex to deliver ads, but is one of few sources to gather usage data about Windows Phone in particular.

A little teaser for the Windows Phone stats report coming up early next week #wpdev twitter.com/ailon/status/2…