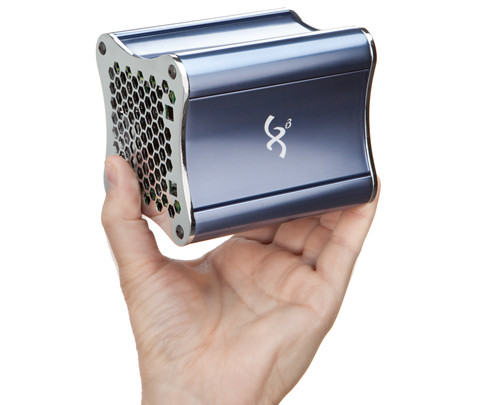 Valve has been hinting strongly it wants to help create some kind of hardware device that would use Valve's Steam client that would connect to a TV similar to a game console. This "Steam Box" seems to be one step closer to reality thanks to today's announcement of Valve's involvement with the PC maker Xi3.

Xi3's press release states that it plans to develop what it calls a "development stage system" that will use the company's Xi3 Modular Computer case similar to the one pictured above. The PC will be designed to work specifically with Valve's Steam client and its recently launched Big Picture mode that has a user interface made especially for large TV screens and gamepads.

Jason A. Sullivan, the CEO of Xi3, states, " ... this new system could provide access to thousands of gaming titles through an integrated system that exceeds the capabilities of leading game consoles, but can fit in the palm of your hand." That would seem to suggest that this system would run on a version of Windows, which is the OS which the platform of choice for the vast majority of Steam games. Valve has recently started beta testing a Linux client of Steam but so far only a handful of Steam games run on Linux.

Valve has also put in an unspecified amount of money into Xi3. Valve will be showing off the system during CES 2013 this week. No other information about this system has been revealed, including no hint of a launch date and price.