Zen Studios is at it again, releasing another new table for the Pinball FX2 framework today. The game, called Epic Quest, attempts to merge the excitement of pinball with aspects of traditional role playing games. The company not only gave us the ability to play the game early, but also provided Neowin readers with codes to get into the action. So how does this latest table hold up, and how does it compare to other tables available for Pinball FX2? 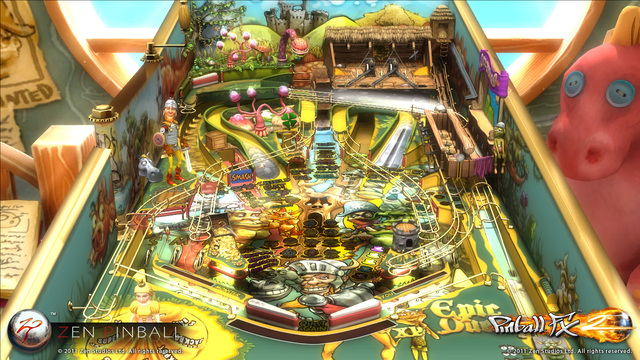 As we have come to expect, the overall table looks beautiful and the animations of our hero, Max, are wonderfully done. What’s different from most tables is that there aren’t many flippers: You have your normal two flippers at the bottom of the table, but the only other flipper is in the upper-left hand corner. The hero stands on the left side of the table and makes various humorous quips during the game. On the right-hand side of the board is the Orcanium. This area is similar to the Blade table where the ball rolls by four holes and by activating the flipper, you push the ball into one of the holes in order to start a battle against a monster. Each monster battle is illustrated with a cute video; luckily Zen Studios realized that this would get old after awhile and allows you to easily skip it. 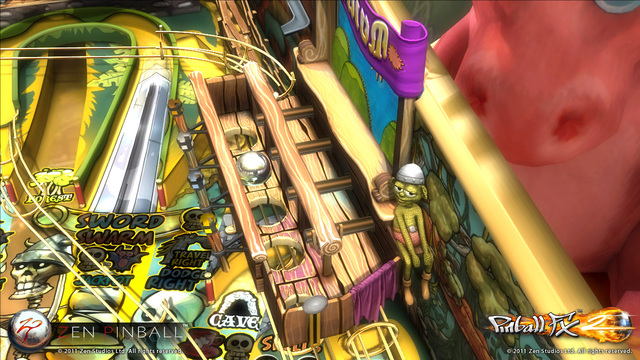 Fighting monsters is the core of the game. Each creature has a certain number of hit points, as does our hero. These are indicated numerically on the LCD screen and also as a health bar at the bottom of the screen. Your hit points are next to the right flipper and the monster’s hit points are next to the left flipper. You battle the creatures by either hitting the “Smash” target on the left or shooting the sword ramp on the right. Bonuses are achieved by hitting the shield ramp followed by the sword ramp, but failure to hit a ramp within a certain amount of time causes Max to take damage. 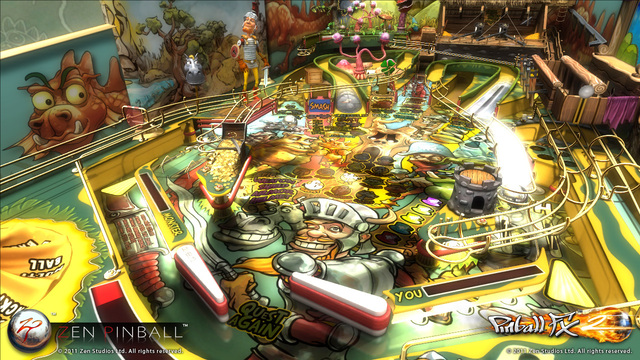 You gain experience points by defeating monsters, and your total is shown as a red bar below the flippers; when it fills up, you level up. You can also gain extra loot by defeating the creatures, then hitting the loot ramp, and these items are categorized as “common” (yellow), “better” (blue), and “Epic” (purple). When you hit the loot ramp after defeating a creature, you’re prompted to select which piece you want, using the flippers to cycle through the list. Some increase Max’s damage, some do special types of damage (such as ice or fire), and some protect him from damage from the creatures. Something interesting to note is that Max retains all experience points and loot gained between games so after a few playthroughs you should be equipped pretty well.

This leads to one of our complaints: The loot doesn’t seem to have much of an effect on game play. By the end of our second game, we had an entire set of epic gear, but we were still hitting the same ramps multiple times in order to defeat skeletons and vampires. The character’s level also doesn’t seem to have much of an impact on actual gameplay, something we were disappointed to see. While we love the idea of an RPG/Pinball combo, we were expecting to see the RPG aspect have some major game impact other than score, but that seemed to be lacking. 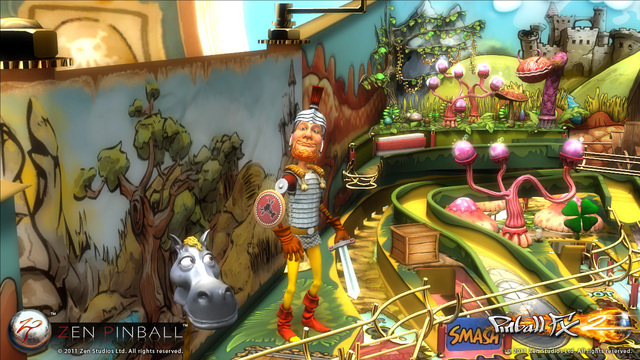 In addition, hitting the required ramps to defeat the creatures is not very difficult so it doesn’t matter what type of loot you have equipped. As with Sorcerer’s Lair, it seems that Zen Studios is striving for a more accessible pinball experience, but while Sorcerer’s Lair had multiple mini-games to play, Epic Quest seemed to be missing them, which is a shame as we thought the RPG factor would be great for some sort of unique experience. That’s not to say that Epic Quest is a bad table. It’s very whimsical, looks great, and is a fun way to pass some time. We just had higher hopes for the RPG integration and instead were presented with a simple, but fun, game.

So should you spend your hard earned $2.50 to buy this table? If you’re a fan of Pinball FX2, then you’ll definitely want to add this to your collection. If you’re new to the genre and want to see what it’s all about, then either this or Sorcerer’s Lair would be a good first purchase although we’d have to give the nod to the latter as it offers more variety for the same price. If you’re a casual fan of the game, then the decision is a bit more difficult. The touted RPG features aren’t as dominant as we had hoped and the game can get a tad repetitive but it’s still a lot of fun.