Budapest game creator Zen Studios, most famous for their line of computer-based pinball games, is releasing a new table for the Xbox 360’s Pinball FX2 framework on October 12th. The game, called Sorcerer’s Lair, puts you in the role of Jake and Amanda, siblings who must defeat the Sorcerer by surviving multiple challenges and collecting up to 13 Obsidian stones.

The first thing you’ll notice is that the table looks beautiful with animations of the evil tree, the Sorcerer in his tower, and the gargoyle guarding the gate all rendered very well. Overall, it’s a good combination of creepy and cute. The sound on the table is also top notch with flippers casting an echoey sound when used. The table is larger than some others in the Pinball FX2 suite, something readily noticeable when switching from this table to the Wolverine table. There’s a lot to do in the play field and everything is clearly labeled and lit, making it easy to know what you’re supposed to be aiming for. 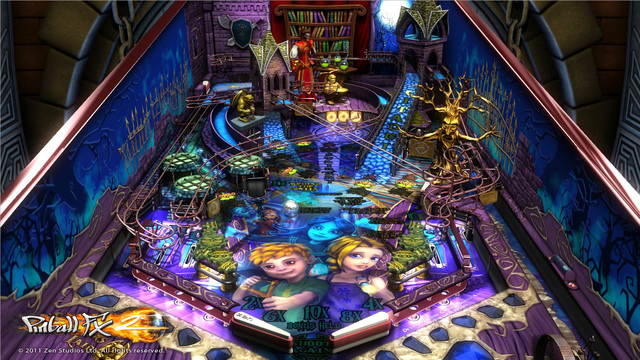 The playfield is colorful and full of interesting targets

When playing the table, you will see that there are a lot of interesting animations going on, but none of them are distracting.  Shoot the ball at the building to the left of the Sorcerer or at the end of the Citadel ramp, and they shift, changing where the ball will travel. The bumpers in the lower play field have gears that move whenever they are struck, and the play field in front of the three yellow drop targets near the top of the table begins to spin when the ball is in the area, making shots more difficult.

When all three drop targets are hit, a small house rises from the table and firing your ball into this house is how you unlock one of six different missions: three of the missions require you to shoot various ramps to complete; two of them take you to a mini playfield where you have to shoot spiders or hit the lit ramps to complete; and one takes you to a mini playfield consisting of gears that you shift by pressing the flipper buttons, something a little different than other tables. These mini-games are a lot of fun, although the one with the gears takes a little getting used to, so expect to lose your ball quickly the first few times. During the review, I was never able to get the ball even halfway through the gauntlet. 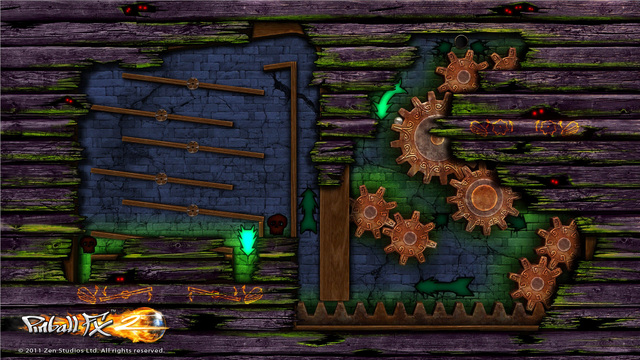 The one thing that stood out right away was the fact that this table seemed much easier than any of the other tables in the Pinball FX2 fleet: the side alleys are recessed from the main table, resulting in far fewer ball out situations that are beyond your control; there are two ways to activate a multi-ball challenge, and neither is very difficult to activate; the final mission only requires activating the six game modes and does not require actually completing them. This accessibility makes the table a lot of fun, but will probably result in extremely high scores. During my review period, I managed to score over 441 million, while the combined score of the other 11 tables I’ve played equaled only 311 million. That said, the game never became boring due to the sheer number of things to do.

Overall, I found this game to be a lot of fun and it is definitely one of the best tables available for Zen Studios' Pinball FX2 framework. This table will provide hours of entertainment for both novices and advanced players and is highly recommended.

Sorcerer’s Lair will be available for download via Xbox Live Arcade on October 12th and will cost 240 points. It requires players to have Pinball FX2 installed on their system first, a free download also available via XBLA.