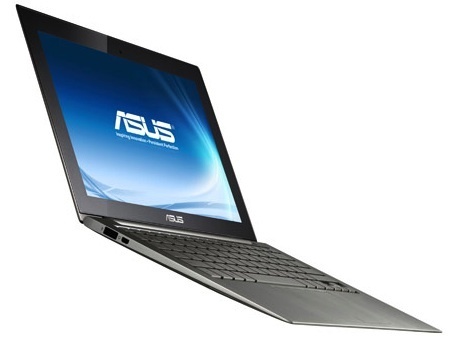 On Monday, Acer announced it would launch its first ultrabooks. Today, as Engadget reports, Asus joined the Ultrabook party with an event in New York City that officially revealed that its first Ultrabook-based notebooks will be made available for sale starting on Wednesday. Pricing for the notebooks, which will be sold under the Zenbooks branding, will begin at $999.

There will be a number of different models and configurations for the Asus Zenbook line up with the top price set at $1,449. The UX21 will be a 11.6 inch notebook that will weight just 2.4 pounds and will have either a Core i5 or Core i7 processor from Intel. It will also come with 4 GB of RAM and a 128 GB solid state drive. Look for the UX21 to have a battery life of about five hours of continuous use. The larger UX31 model will have a 13.3 inch screen, weigh 2.9 pounds, contain 4 GB of RAM and will have support for up to 256 GB  of space for its solid state hard drive. It will also come in either Core i5 or Core i7 processor flavors and will have a battery life of seven continuous hours of use. All of the models will have USB 2.0 ports and 3.0 too.

As we reported earlier this week, more notebooks that will use Intel's Ultrabook concept design are in the works from makers such as Toshiba, Lenovo and others.