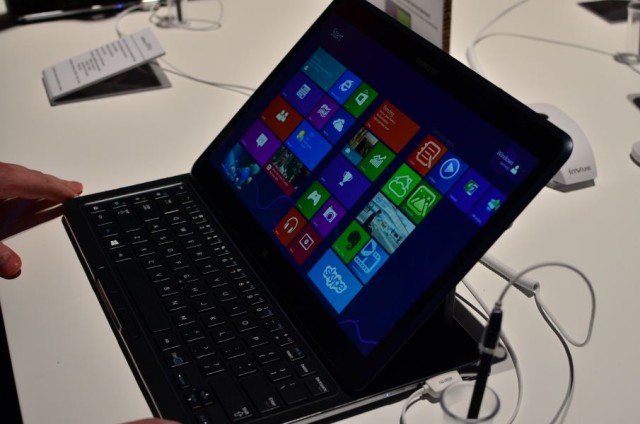 At Samsung's ATIV event today, the company has announced a range of products, perhaps the most impressive of which is the ATIV Q. It's a 13.3-inch hybrid tablet-slider device that runs both Windows 8 and Android on a super high resolution 3200 x 1800 display (QHD+), which just so happens to be a pixel density of 275 PPI. Not only is the display very dense, but it's also optimized for use in sunlight, and comes with S Pen stylus support.

Under the hood you get an Intel 'Haswell' Core i5 processor and, apparently, nine hours of battery life, all in a magnesium package that weighs just 1.29 kg and is under 14mm thick. Interestingly the dual-OS support allows you to pin Android apps to the Windows Start screen, and pin Windows apps to the Android homescreens, making it easier than ever to switch between apps for both ecosystems.

Unfortunately there's no concrete pricing or availability info for this tablet, with Samsung only stating it would come to the UK later this year.