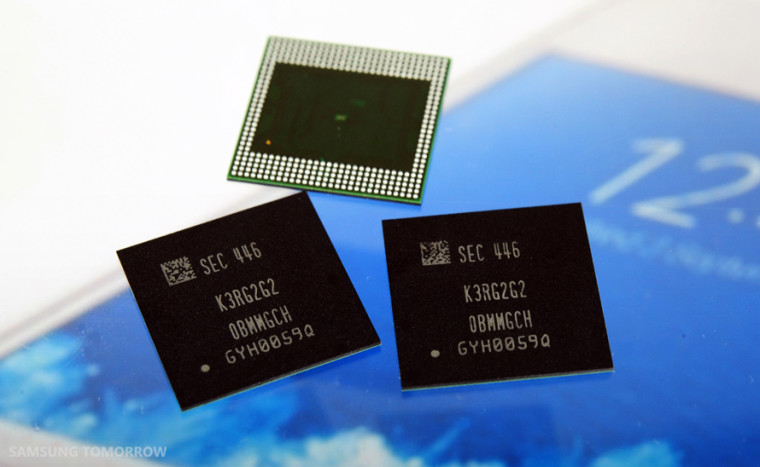 Back in 2013, Samsung announced that it would begin the mass production of the first eight gigabit (Gb) low power double data rate 4 (LPDDR4) mobile DRAM that in theory could allow for companies to put in as much as 4GB of RAM in a smartphone. It was speculated that the company would unveil its Samsung Galaxy S5 with the said amount of RAM, however, this was not the case. The Samsung Galaxy S5 came with 2GB of RAM, and the maximum the company achieved was 3GB RAM in the Galaxy Note 3.

Now Samsung is ready to integrate these powerful chips into its high end smartphones in 2015. Trusted Reviews reports that the 8-gigabit LPDDR4 is constructed using Samsung's 20nm process and surpasses the previous 4-gigabit DDR3 RAM with double the performance and density. The firm's Executive of Memory Sales and Marketing, Joo Sun Choi states:

By initiating production of the 2nm 8-gigabit LPDDR4, which is even faster than the DRAM for PCs and servers and consumes much less energy, we are contributing to the timely launch of UHD, large-screen flagship mobile devices.
As this major advancement in mobile memory demonstrates, we will continue to closely collaborate with global mobile device manufacturers to optimize DRAM solutions, making them suitable for next-generation mobile OS environments.

Although, the executive does not explicitly state it, his statement has also lead to speculations that the 'large-screen flagship' devices coming in 2015 with 4GB of RAM integrated into them could also support 4K displays. While 4K displays may not appeal to everyone, the usage of smartphones as slide-in displays for VR headsets would definitely benefit with the increased pixel count.

However, with many tech sites predicting the upcoming Sony Xperia Z4 to launch with 4GB of RAM, using the memory chips also built by Samsung, surely gives the South Korean company a run for their money.