Back in 2015, Microsoft unveiled the Elite Controller geared towards gamers who found the standard controller a bit too basic in its capabilities. With Forza Motorsport 7 now officially out in the wild after launching yesterday, SCUF Gaming, in partnership with Turn 10 and Porsche, has lifted the curtain on an Elite Controller that takes everything to the next level and will become available on October 7. 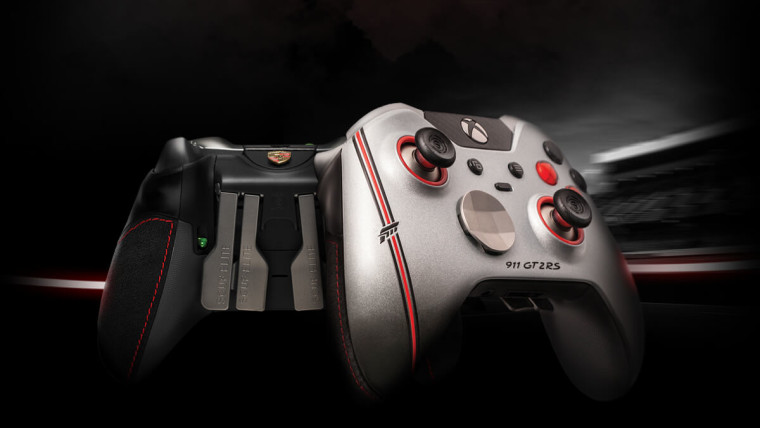 The 'extremely limited edition' Porsche 911 GT2 RS-inspired controller features paddles that have been moved vertically, instead of the traditional horizontal layout. According to the product page, this supposedly makes shifting gears easier for racing - if you can manage the manual shift option that is. Beyond that, the controller comes with a stitched Alcantara finish on the grips, which is the same material used in the car Turn 10 unveiled at E3 this year, and that can be found on the Surface Type Covers from Microsoft.

Other than that, it's pretty much the same as the original Elite controller, with swappable thumbsticks, paddles, and d-pad. The controller comes in an 'exclusive' silver color with branding for both Porsche and Forza Motorsport in the way of a crest for the former, and a decal for the latter, as well as a carry case and a USB charging cable as one can expect.

The company will release two variants, firstly the Elite Controller as described above of which only 2,000 will be made available of at $299.95 later this month. In addition to this, SCUF will ship 500 exclusive Collectors Edition bundles, that include a 1/43 scale model of the 2018 Porsche 911 GT2 RS, Porsche-designed carry case, and a Certificate of Authenticity for $369.95. The first 50 units of the controller will be available for sale at a special SCUF Gaming Forza Elite launch event held at the Microsoft Store on Fifth Avenue in New York this Saturday.

Forza Motorsport 7 launched on October 3 for Windows 10 and Xbox One. The game improves on the previous installment in several ways and will come with even more improvements when the Xbox One X launches next month. The Forza franchise has grown from strength to strength, with games in the franchise attracting over 5 million active monthly players on the platforms they are available on.