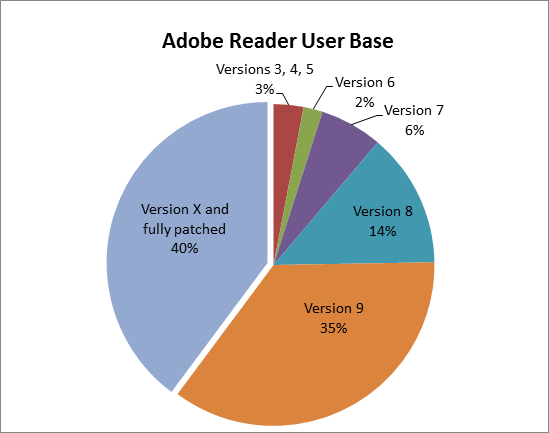 Avast Software, one of the biggest names in computer security have announced that six out of ten people are vulnerable to attacks through them having outdated versions of Adobe Reader.

What’s more worrisome is that hackers commonly use exploits in Adobe’s products which means this specific exploit is likely seen a high amount of usage.

Avast released a statement which said “an analysis of avast! antivirus users found that 60.2% of those with Adobe Reader were running a vulnerable version of the program and only 40% of users had the newest Adobe Reader X or were fullypatched. One out of every five users also had an unpatched version of Adobe Reader that was at least two generations old (8.x).”

Although the amount of Adobe Reader exploits has significantly dropped over the years, hackers are still targeting older versions because the usage of them collectively is extremely high. The 60% of unprotected users are being advised to download the latest version in order to defend themselves against any unsuspected attacks.

Adobe’s senior director of product security and privacy, Brad Arking was quoting as saying "we find that most consumers don’t bother updating a free app such as Adobe Reader as PDF files can be viewed in the older version. In many cases, users only update when provisioning a new machine," he said.