Market share percentages for the last 6 months have been revealed showing Google Android capable phones have been outselling iPhones for the first time in the US, however these percentages do not include the millions of iPhone 4s sold in the past few weeks.

The data, recorded by the Nielsen Company, shows that Google Android phones have surpassed the iPhone in operating system share in the last quarter. With Android sales hovering around 27%, while iPhone fell to 23%, it is the first time that the Google OS phones have had a larger percentage of sales than the iPhone. Once again keeping mind that this doesn’t include the total sales of the iPhone 4, only the 1st week.

Sales for the last 6 months of this year can be seen below. Android OS is still considered to be in its infancy when compared to both the iPhone and the Blackberry operating systems, as it is only in its second year on the market. With a worldwide sales growth of 886%, Android is undeniably seeing massive sales increases. This may be due to the 2.1 OS update that has become a very solid OS over the last year.

Motorola and HTC have both had an increase in revenue thanks to the Android OS, with Motorola going from a deficit to making a profit and HTC having a 66% increase in sales year-over-year for the month of June.

The iPhone 4 has the highest percentage of customers willing to remain using the iPhone when compared to both the Android OS and Blackberry OS. The iPhone has a 89% attach rate to the consumers using the product, in comparison to the Android's 71%. Both these percentages are far better than the Blackberry’s 42%. This data was also recorded by the Nielsen Company and is seen below in the graph. For one reason or another, people seem to forget that Nokia dominates the phone market globally. In the second quarter of 2010, the Finnish phone developer sold an astounding 23.8 million handsets. Nokia saw a respectable 41% growth rate over the prior year’s second quarter sales.

As a whole, the smartphone market has now hit one quarter of all mobile devices sold. An increase of 9% since this time last year. 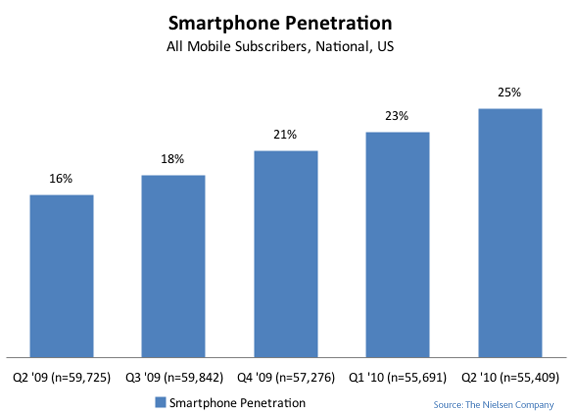