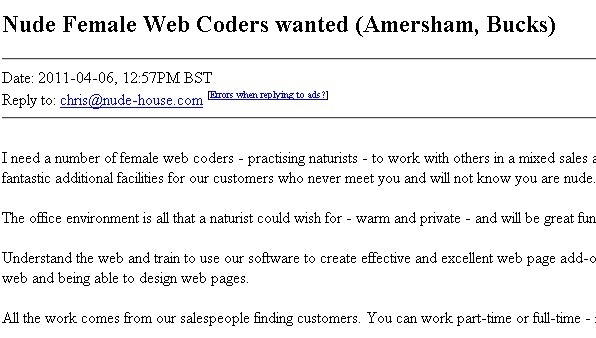 Female? Have web coding or sales skills? Happy to work with your kit off? UK software firm Nude House could be the workplace for you.

The Sydney Morning Herald reports that the firm's 63-year-old owner, Chris Taylor, has put out an ad via Craigslist for naturists interested in US$39,150 sales and web coding positions at his Buckinghamshire office.

Nude House provides a service dubbed ''Move Your Mouse'', enabling text and additional images to pop up when a mouse is waved over an online picture.

Mr Taylor, himself a naturist, told the Telegraph the recruitment drive was about creating a gender balance in the work place.

''We have got a number of males and only one female, so we are trying to find more females to balance the numbers. As far as I am aware, there is no other company in the world that offers naturists proper work,'' he said.

Those thinking this could be the ideal opportunity for a bit of easy workplace romance should look elsewhere, he said.

''We are trying very hard to identify all the people who are applying just to see naked boys and girls and those who just want to have sex, as naturists don't work that way,'' he said.

''There are strict rules to stop any messing about, so I think those, plus their own professionalism, will ease over most problems there could be,'' he added when questioned by CNet.

Those with qualms about being seen in their birthday suit needn't worry either - Mr Taylor's ad promises that customers will never meet his employees in the flesh and will never know they are nude; apparently he doesn't expect the name of the business to tip them off.

Ironically, his initial ad was removed from Craigslist after being flagged as inappropriate, CNet reports, though it has since reappeared, entitled ''Nude Female Web Coders wanted''.

Mr Taylor has rejected suggestions the job listing is a joke or publicity stunt and if nothing else, a nudist workplace would certainly solve the age-old problem of deciding what to wear each morning.