Six months ago today, Microsoft officially launched Windows 8 to the general public and today, Windows 8 is installed on ~4% percent of all PCs worldwide, according to new numbers from StatCounter. 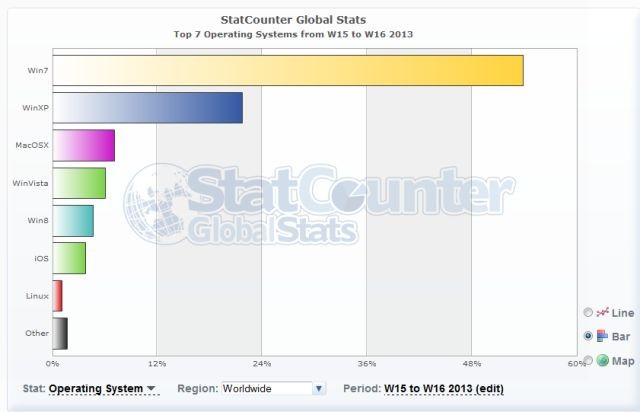 The company's website, which takes its information based on a pool of three million websites it monitors, shows that for the last two weeks, Windows 8 was installed and used on 4.69 percent of all PCs worldwide. Windows 7, launched in 2009, has a 53.89 percent market share, according to StatCounter. Windows XP, launched in 2001, has a market share of 27.7 percent and Windows Vista, released in 2007, is still being used by 6.06 percent of all PCs.

Microsoft has been quiet about the sales status of Windows 8 lately. The company did not provide any new or updated information about Windows 8 PC sales or upgrades during its quarterly financial report earlier this month. The last official statement concerning Windows 8 sales came in early January, when Tami Reller, Microsoft's Windows Chief Marketing Officer and Chief Financial Officer, announced that it had sold 60 million licenses for Windows 8, combining upgrades and sales to OEMs for new devices.