The long awaited roll out of Steam on OS X begins today after its announcement in early March. In Valve's announcement released today Steam Play will be launched which allows users to purchase Steam software once and be able to play it on all Steam supported platforms. This could be another hint that Steam will be heading to Linux in the near future after evidence was found earlier this month suggesting a client was being developed.

New games will be released on Steam for OS X on Wednesdays in the coming weeks which Valve says will "highlight specific functionalities of Steam on the Mac".

Valve's first Source engine based release will be Portal and will feature Steam Play, however this specific announcement may suggest other Valve games might not be available at the release of Steam for Mac. Although Valve has said previously that their entire range of games including the Half-Life and Left 4 Dead series will eventually become available on OS X. The image below from the Steam beta on Mac also shows Team Fortress 2 being available but this is not confirmed to be available for release this Wednesday. 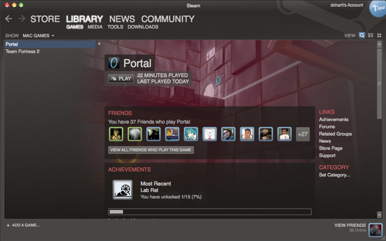 The Steamworks suite of publishing and development tools from Valve will also be available on OS X. The features of this suite include product key authentication, copy protection, auto-updating, social networking, anti-cheating technology and more. All of these will be available for free for use on digital and physical versions of games.

Runic Games' Torchlight will be among the games available at launch alongside Portal which acknowledges that 3rd party developers for Steam are also showing interest in porting their games over to Mac.

The release from Valve did not state at what time Steam for Mac would be released nor did it reveal when Valve games besides Portal would be available.