It seems like each day brings us a small step closer to the inevitable launch of Google's next iteration of their mobile operating system, Android 2.2 (aka Froyo). Just yesterday, we reported what seems to be the first picture of Froyo's homescreen, along with the new features that it seems to bring. Today, some more excitement has been brought to our attention.

For the past week, Android Police has been privileged to have a Nexus One running Android 2.2 with full Flash 10.1 support in their possession. The site plans to release video footage of the new OS, but in the meantime, has left us salivating over the few details they've decided to share.

The most fascinating tidbit of information is in reference to the performance boost that 2.2 brings over 2.1 (aka Eclair). Using the new JIT (just-in-time) compilation in its kernel, Froyo seems to perform 450% faster than Eclair. On the Linpack benchmark test, a Nexus One running 2.1 managed a score of 6.5 to 7 MFLOPS. Compared to the HTC Hero, which scored a 2, that may look pretty darn good. However, if you compare it to a Nexus One running Froyo, you'd probably have to double check your numbers before believing what you'd see. Android 2.2 managed a score of 37.5 MFLOPS. This means that without a single hardware improvement, Froyo delivers a whopping 450% speed boost to an Android handset.

Knowing this information, we can now understand how the latest release of the Android OS is able to run Flash 10.1 as smoothly as it does. It also explains why Adobe waited to implement it in this specific version. Pushing a full version of Flash on the Android platform prior to Froyo would probably not have delivered respectable performance. With the tweaks Google has seemed to implement, Android plus Flash is looking like a deadly combo.

UPDATE: Android Police has added the following clarification regarding the connection between Flash performance and JIT compilation:

"Some of you (like Cyanogen and Uhhhh) pointed out that JIT compilation only helps programs that are not compiled to native code, which Flash and some video codecs/drivers seem to be. Thank you for this clarification.

While real-life improvements will most certainly not be 450% across the board, we still expect the N1 and even Flash to benefit from JIT because, as other programs become more efficient, more CPU will be available to such natively compiled programs." 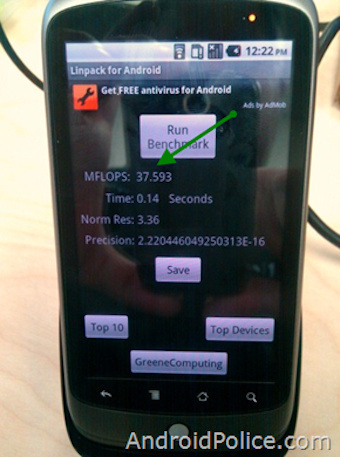