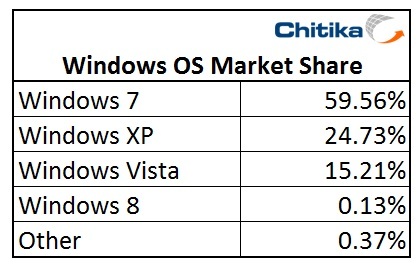 Windows 8 may be getting ready to launch its Release Preview during the first week of June, but in the meantime, the Consumer Preview version seems to be gaining some market share on its own. A new study by Chitika Insights claims that Windows 8 is currently being used by 0.13 percent of all Windows PC owners.

Chitika Insights said its results are based on looking at a sample of the hundreds of millions of ad impressions generated by the Chitika ad network from April 13th to April 19th. It states, "The increased level of activity for Windows 8 is definitely a good sign for Microsoft, particularly as it has sustained itself over the last two months."

For advertisers and marketers, this level of adoption for the Windows 8 Consumer Preview hints at two major trends. Firstly, the rapid rate of technological innovation is cutting down on product development times and lifecycles, fundamentally changing the way we market. Furthermore, it illustrates how a new segment can rapidly develop and become a true moving force in any market which has to be catered to in its own ways to fully take advantage of its value.


Join in the discussions on Windows 8 on our forums
- get top tips on the Consumer Preview, and share your thoughts on Microsoft's new OS with other users!